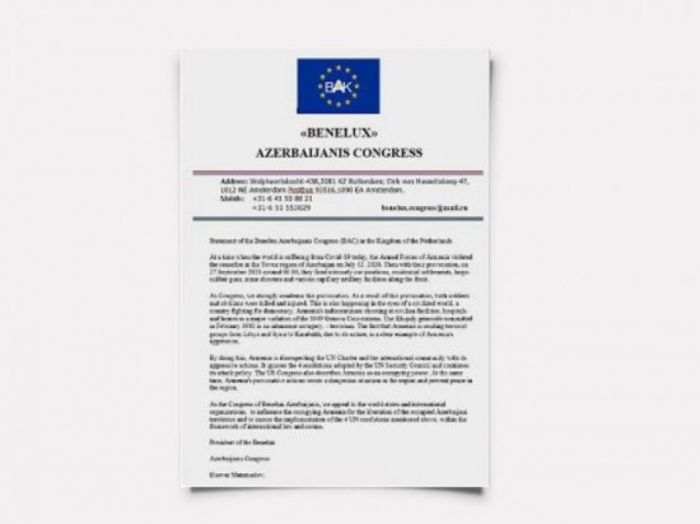 The Benelux Azerbaijanis Congress, based in the Netherlands, has issued a statement strongly condemning Armenia’s recent military provocations against Azerbaijan, the State Committee for Diaspora Affairs told AzVision.az.

The statement recalls that at a time when the world is suffering from COVID-19, the Armenian armed forces violated the ceasefire in the Tovuz region of Azerbaijan on July 12, 2020.

“Then with their provocation on September 27, 2020, they fired intensively our positions, residential settlements, using large-caliber guns, mine shooters and various artillery facilities along the front. As a result of this provocation, both soldiers and civilians were killed and injured. This is also happening in the eyes of a civilized world and countries fighting for democracy,” the statement reads.

The Congress stressed that Armenia’s shooting at civilian facilities, hospitals and homes is a major violation of the 1949 Geneva Conventions.

It also said that Armenia is disrespecting the UN Charter and international community with its aggressive actions.

As a conclusion, the Congress called on world countries and international organizations to influence the occupying Armenia for the liberation of the occupied Azerbaijani territories and to ensure the implementation of the relevant UN Security Council resolutions.