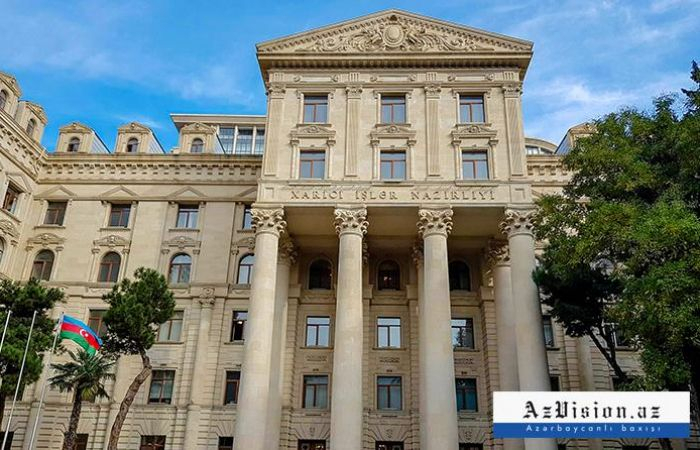 The Ministry of Foreign Affairs of the Republic of Azerbaijan commented on the statement of the OSCE Minsk Group Co-Chairs, AzVision.az reports citing the press service of the MFA.

As it is known, on September 27, 2020, the Armenian armed forces grossly violated the ceasefire, fired at the positions of the Republic of Azerbaijan along the line of contact with large-caliber weapons, mortars and artillery of various calibers, and launched another act of aggression against Azerbaijan.

A new act of aggression against the positions of Azerbaijan is a continuation of the provocative steps taken by Armenia in recent months, including an attempt to attack in the Tovuz direction on July 12-16, a sabotage and reconnaissance provocation in the Goranboy direction on August 23, a policy of illegal settlement in the occupied territories of Azerbaijan, as well as provocative statements and activities of the Armenian leadership.

President of the Republic of Azerbaijan Ilham Aliyev, in his statement at the general debate of the 75th session of the UN General Assembly, has warned that Armenia is preparing for a new military provocation against Azerbaijan.

We would like to note that the provocations carried out by the Armenian leadership, both in word and in deed, including the visit to Shusha to participate in the inauguration of the self-proclaimed regime in the occupied territories of Azerbaijan, the provocative "Karabakh is Armenia" statement made in the occupied city of Khankendi, the introduction of a "new war for new territories" concept by the occupying country, putting forward 7 pre-conditions in the conflict settlement negotiations, as well as attempts to change the talks format, have dealt a blow to the conflicts settlement process mediated by the OSCE Minsk Group co-chairs.

As part of another military aggression against Azerbaijan, Armenia’s armed forces, faithful to their traditions, have purposefully targeted Azerbaijani civilians and civil infrastructure in gross violation of the norms and principles of international law, in particular international humanitarian law and the 1949 Geneva Conventions and their Additional Protocols, thus committing various crimes against the civilian population.

As of October 1, 2020, 19 Azerbaijani civilians were killed, 55 were injured and more than 200 houses and civilian facilities were destroyed.

There are numerous facts of the use of terrorist groups and mercenaries in military operations by Armenia during the occupation of the Nagorno-Karabakh region and surrounding areas of Azerbaijan. At present, the Armenian leadership continues this policy and makes extensive use of extremist elements against Azerbaijan as part of its new act of aggression.

The OSCE Minsk Group in its numerous statements so far has stressed that the status quo is unacceptable. Armenia, however, acting contrary to this, is trying to consolidate the status quo regime based on occupation. It is obvious that Armenia is not interested in resolving the conflict through negotiations and is trying to annex the occupied territories.

To date, Armenia has not complied with the requirements of numerous decisions adopted by international organizations, including, first of all, those reflected in the UN Security Council Resolutions 822, 853, 874 and 884 of 1993, regarding the withdrawal of Armenian occupying forces from all occupied territories of Azerbaijan. On the contrary, acting in an atmosphere of impunity, Armenia is undertaking new acts of aggression against Azerbaijan.

The political and military leadership of Armenia bears full responsibility for the existing situation in the region.