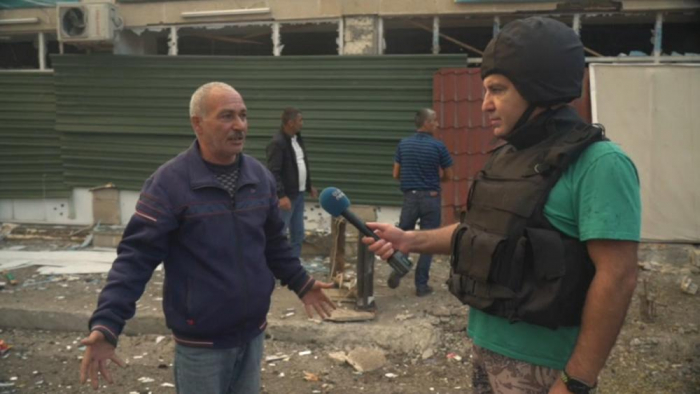 Civilians are continuing to live with the threat of bombardments as the latest flare-up between Azerbaijan and Armenia forces in Nagorno-Karabakh appears to have spilt over into towns along the border, footage filmed exclusively by Euronews on the Azeri side shows.

Terter has been the target of heavy Armenian bombardments over the last days, the same way as towns on the Armenian-held side have been bombarded too. As well as housing, Terter's shopping district was also badly-damaged in an apparent strike.

Euronews filmed under supervision in Terter but without interference from the Azerbaijani military.

"Armenian troops fired one rocket that fell here. And they also hit over there. We've lived in Terter for a long time and we're not afraid to stay here," one resident told Euronews.

The story in Terter is a familiar tale in towns on both sides of the Azerbaijani-Armenian border.

"I'm ill and I was cooking a meal for my son who's also ill. Suddenly, from behind me the door was blown out and onto the ground. I turned around and everything was destroyed," one woman told Euronews.

Even when the immediate threat of bombardments has eased, undetonated shells continue to pose a danger to residents of the city.

Close to a family home, which appeared to still be inhabited, our crew found an unexploded 300 mm Smerch missile on the ground. Close by lay a child's stroller and other personal effects abandoned by their owners.

The region of Nagorno-Karabakh lies inside Azerbaijan but has been under the control of ethnic Armenian forces backed by Armenia since the end of a separatist war in 1994.