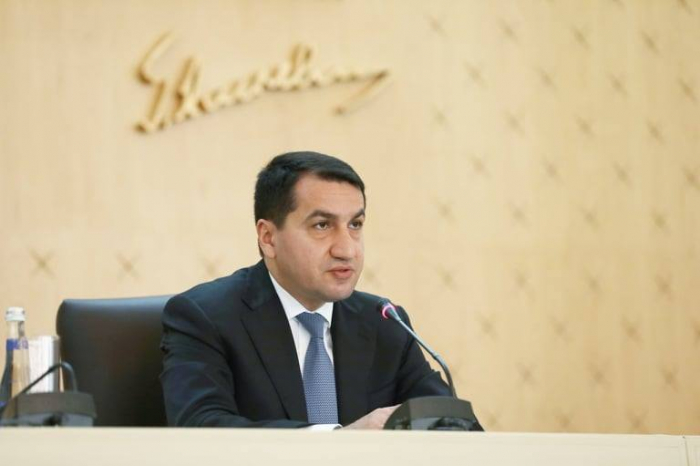 A heavy blow has been inflicted on the Armenian armed forces over the past 10 days as a result of the counteroffensive operation of the Azerbaijani Army in response to Armenia’s provocation and shelling of Azerbaijani civilians, said Hikmet Hajiyev, Assistant to the President of Azerbaijan, Head of the Foreign Policy Affairs Department of the Presidential Administration.

Hajiyev said the processes over the past year have shown that Armenia was considering the occupation of Azerbaijani territories to be over.

“Armenian Prime Minister Nikol Pashinyan’s statement “Karabakh is Armenia and full stop” was also intended for this. The status quo based on occupation was preserved. Armenia was using all opportunities to carry out the annexation of our territories. They were conducting an illegal resettlement in Jabrayil district, where Armenians never lived.  Despite the blow inflicted on Armenia during the 2016 April battles, this country’s political and military leadership was still trying to present itself as the victor,” he said.

The presidential aide pointed out that under the leadership of the Supreme Commander-in-Chief, President Ilham Aliyev, Armenia’s military-strategic illusions were shattered.

“Armenia’s military infrastructure was built at a cost of billions over a period of 30 years. A large amount of weapons and military equipment was deployed by Armenia in a small geographical area. Conditionally, every square meter of land is now under fire. There were many natural obstacles. Armenia occupied these lands for 7-8 years in the reality of that period. In a short time, the vast majority of this Armenian military equipment was destroyed,” he added.

The presidential aide stressed that the military operations also inflicted a serious blow to Armenian economy.

The status quo has changed from a military point of view, said Hajiyev, noting that the line of contact exists no more.

He accused Armenia of trying to turn the line of contact into a state border.

Hajiyev pointed out that the first phase of the operation to force Armenia to peace has been successfully completed.

A statement issued in Moscow declared a temporary ceasefire on humanitarian grounds. There is experience of declaring a humanitarian ceasefire during military operations. During this period, the bodies of servicemen killed on the battlefield are removed, and assistance is provided to injured.

Despite the declaration of a ceasefire on humanitarian grounds, the Armenian armed forces continue to violate the ceasefire in various directions of the frontline. If Armenia attempts to re-occupy the liberated territories, it will still receive its deserved response.

Following the humanitarian ceasefire, substantive and effective talks must be held immediately. The roadmap for the negotiation process is known to everyone. Azerbaijan is ready for this. Pursuant to the mandate of Resolution 853 of the UN Security Council, the withdrawal of Armenian troops from the occupied territories of Azerbaijan must be ensured. It is necessary to direct the current situation towards a fundamental settlement of the conflict and the maintenance of lasting peace in the region.

What happened once again demonstrates that the situation can always become tense. All resources should be targeted on the fact of occupation and the withdrawal of Armenian troops from the occupied territories of Azerbaijan. After that, lasting peace in the region can be ensured.