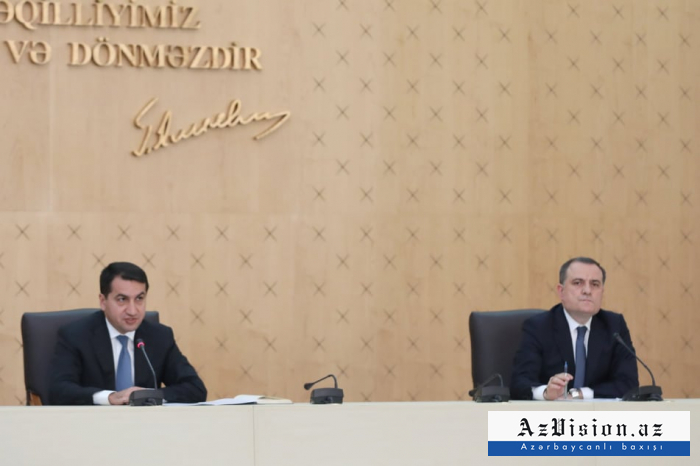 Azerbaijani FM Jeyhun Bayramov and Assistant to the President of Azerbaijan, Head of Foreign Policy Affairs Department of the Presidential Administration Hikmet Hajiyev held a joint briefing on the current situation regarding the military clashes between Armenia and Azerbaijan in the Nagorno-Karabakh region, AzVision.az reports.

For many years, negotiations on the Armenia-Azerbaijan Nagorno-Karabakh conflict have been imitated, however, in this stage, Azerbaijan does not allow imitation of the talks, said Azerbaijani FM Jeyhun Bayramov at the briefing held on October 10, Azvision.az reports.

Azerbaijani FM noted that the materials on the participation of the terrorists in the Armenian side were collected and submitted to the embassies of various countries and relevant international organizations. Jeyhun Bayramov also highlighted the evidence proving the involvement of PKK terrorists in the military operations in the Karabakh region stating that the Armenian president also admitted this fact.

Also, Jeyhun Bayramov noted that if Armenia does not comply with the ceasefire, it will see the bitter consequences: “The Armenian leadership is deceiving its people with fake success news in the military operations aiming to send a positive message to the local people. This confirms that they are in a difficult situation. "

A heavy blow has been inflicted on the Armenian armed forces over the past 10 days as a result of the counteroffensive operation of the Azerbaijani Army in response to Armenia’s provocation and shelling of Azerbaijani civilians, said Hikmet Hajiyev, Assistant to the President of Azerbaijan, Head of the Foreign Policy Affairs Department of the Presidential Administration.
Hajiyev said the processes over the past year have shown that Armenia was considering the occupation of Azerbaijani territories to be over.

“Armenian Prime Minister Nikol Pashinyan’s statement “Karabakh is Armenia and full stop” was also intended for this. The status quo based on occupation was preserved. Armenia was using all opportunities to carry out the annexation of our territories. They were conducting an illegal resettlement in Jabrayil district, where Armenians never lived.  Despite the blow inflicted on Armenia during the 2016 April battles, this country’s political and military leadership was still trying to present itself as the victor,” he said.

The presidential aide pointed out that under the leadership of the Supreme Commander-in-Chief, President Ilham Aliyev, Armenia’s military-strategic illusions were shattered.

“Armenia’s military infrastructure was built at a cost of billions over a period of 30 years. A large amount of weapons and military equipment was deployed by Armenia in a small geographical area. Conditionally, every square meter of land is now under fire. There were many natural obstacles. Armenia occupied these lands for 7-8 years in the reality of that period. In a short time, the vast majority of this Armenian military equipment was destroyed,” he added.

The presidential aide stressed that the military operations also inflicted a serious blow to Armenian economy.

The status quo has changed from a military point of view, said Hajiyev, noting that the line of contact exists no more.

He accused Armenia of trying to turn the line of contact into a state border.

Hajiyev pointed out that the first phase of the operation to force Armenia to peace has been successfully completed.

A statement issued in Moscow declared a temporary ceasefire on humanitarian grounds. There is experience of declaring a humanitarian ceasefire during military operations. During this period, the bodies of servicemen killed on the battlefield are removed, and assistance is provided to injured.

Despite the declaration of a ceasefire on humanitarian grounds, the Armenian armed forces continue to violate the ceasefire in various directions of the frontline. If Armenia attempts to re-occupy the liberated territories, it will still receive its deserved response.

Following the humanitarian ceasefire, substantive and effective talks must be held immediately. The roadmap for the negotiation process is known to everyone. Azerbaijan is ready for this. Pursuant to the mandate of Resolution 853 of the UN Security Council, the withdrawal of Armenian troops from the occupied territories of Azerbaijan must be ensured. It is necessary to direct the current situation towards a fundamental settlement of the conflict and the maintenance of lasting peace in the region.

What happened once again demonstrates that the situation can always become tense. All resources should be targeted on the fact of occupation and the withdrawal of Armenian troops from the occupied territories of Azerbaijan. After that, lasting peace in the region can be ensured.

There was no any discussion over changing the OSCE Minsk Group co-chairs and we continue our cooperation with the co-chairs, said Azerbaijani FM Jeyhun Bayramov at the briefing held on October 10.

Azerbaijani FM noted that the official Baku has stated its position on France's unilateral, biased support for Armenia highlighting the importance of expressing our position in such cases and not running away from dialogue.

“As for Russia's position, Russia has maintained a neutral position and has not openly supported any country. Russia is a neighbour of Azerbaijan, we have strategic relations. Over the past 10 days, we have witnessed a balanced attitude of Russia to Azerbaijan and Armenia, and a neutral position has been maintained. Russia calls for an immediate end to the conflict, and we accept this as normal”, Jeyhun Bayramov added.

"Azerbaijan supports the political settlement of the Nagorno-Karabakh conflict, but Azerbaijan has every right to resolve the conflict by military means", Azerbaijani Foreign Minister Jeyhun Bayramov said at today's briefing, AzVision.az reports.
"Time will show which way Armenia will prefer. Unequivocally, Azerbaijan is determined to restore its rights and territorial integrity. It is clear to everyone that the determination of the Azerbaijani people in this direction is very high".

"Whoever thinks that this conflict is ancient history and the people of Azerbaijan can be even more patient, it became clear that we are at the end of our rope and artificial maintenance of the status quo does not benefit anyone."

As for the resumption of the combat operations, the minister noted that Armenia must be seriously committed its obligations, return to the negotiation process and take real steps: "The imitation process should be finished. Currently, military operations are underway".

Turkey is expected to be closely involved in negotiations process within the OSCE Minsk Group and other formats regarding the Nagorno-Karabakh conflict, Assistant to the President of Azerbaijan, Head of Foreign Policy Affairs Department of the Presidential Administration Hikmet Hajiyev said at the briefing held on October 10.

Hikmet Hajiyev noted the significant role of Turkey in the resolution of the Nagorno-Karabakh conflict as a member of the OSCE Minsk Group and a neighbouring country in the region.

“Turkey is also concerned over the processes in the South Caucasus and continue its efforts to improve the situation. It is expected that brotherly Turkey, as a regional state, will be closely involved in both the Minsk Group format and other formats”, Hajiyev added.

The Special Declaration of the online NAM Ministerial Meeting which condemns Armenian military provocation and supports the territorial integrity of Azerbaijan, is a clear message to occupant Armenia, said Azerbaijani FM Jeyhun Bayramov at the briefing on October 10.

Azerbaijani FM highlighted the significance of changin the status quo noting that there was no pressure on Armenia for this change: "Armenia has no prospects for development until the conflict is resolved. The operations carried out over ten days provide a basis for rapid progress in a number of areas."

Note, on Ocotber 9, the Ministerial Meeting of the Non-Aligned Movement adopted a special declaration affirming its support to the settlement of the conflict between Armenia and Azerbaijan on the basis of the United Nations Security Council resolutions (S/RES/822, S/RES/853, S/RES/874, S/RES/884), says the declaration.

There is no information about the timeframe of a humanitarian ceasefire reached between Azerbaijan and Armenia, Azerbaijan’s Foreign Minister Jeyhun Bayramov said at a briefing on Saturday, AzVision.az reports.

Bayramov said the reflection of the basic principles in the third paragraph of the Moscow statement, in fact, envisages a timetable for the withdrawal of Armenian troops from the occupied Azerbaijani territories.

“The document does not reflect the ceasefire timeframe. It is difficult to say how long it will take ICRC’s efforts to exchange bodies and prisoners of war. The ICRC can provide information in this regard. Several hours have passed since the ceasefire was declared. After a while, we will make an accurate forecast,” the minister added.

The format of the negotiation process remains unchanged which means that the parties are Azerbaijan and Armenia, Azerbaijani Foreign Minister Jeyhun Bayramov said at the briefing, Azvision.az reports.

“The status quo had to change and there was no pressure on Armenia. It became clear from the talks with the co-chairs that they also understand this. This is also necessary for Armenia”, Azerbaijani FM noted.

"Our victories on the battlefield give us an additional advantage at the diplomatic level which was indicated in the third and fourth paragraphs of the statement. The first condition is that in this document, along with the humanitarian ceasefire, the Armenian side undertook to reaffirm the basic principles of the conflict and to hold substantive talks on the basic principles immediately after the ceasefire is ensured”, Jeyhun Bayramov highlighted.

“These are principles that the Armenian side has been rejecting for a year. At the same time, they have recently put forward new conditions. The most irritating of them was the claim that Azerbaijan was no longer negotiating with Armenia, but with a so-called - the "Nagorno-Karabakh Republic". The document noted that the format of the negotiation process remains unchanged. This means that the parties here are Azerbaijan and Armenia”, Bayromov added.

"Humanitarian ceasefire was declared with the initiative of the Russian President as a result of a meeting of foreign ministers in Moscow. The main goal here is to ensure a humanitarian ceasefire," Azerbaijani Foreign Minister Jeyhun Bayramov said at today's briefing.
Bayramov note that Armenia continued attacks neglecting the ceasefire.

"The relevant document signed in Moscow is considered for the exchange of prisoners of war and other detained persons and bodies of the dead servicemen. Coordination of this work is entrusted to the International Committee of the Red Cross. The conditions for the start of operations have not been created yet because Armenia has shown its provocative face once again," Bayramov added.

A ceasefire was supposed to be provided at 12 o'clock today, but Armenia attempted to carry out operations and was repulsed. Our victories on the battlefield have given us advantages in the diplomatic sphere, " Bayramov said.

Until now, Armenia has been dictating and setting conditions. Today, the status quo has been changed, no one can set conditions for Azerbaijan", Head of Foreign Policy Affairs Department of the Presidential Administration Hikmet Hajiyev said, AzVision.az reports.

"The ceasefire agreed in Moscow is of a humanitarian nature. Our military and diplomatic efforts will continue. As a further step, the Minsk Group must take concrete steps to withdraw Armenian troops from Azerbaijani territory on the basis of specific details", he said.

Armenia continues its military provocations despite the declaration of ceasefire agreed in Moscow, said Hikmet Hajiyev, Assistant to the President of Azerbaijan, Head of Foreign Policy Affairs Department of the Presidential Administration.

All this once again demonstrates Armenia’s duplicity, Hajiyev said at a briefing on Saturday, AzVision.az reports.

The presidential aide noted that the Azerbaijani Armed Forces continue to adequately respond to Armenia’s provocations.

“The international community has once again witnessed Armenia’s two-faced policy,” he said.

Hajiyev stressed that the ceasefire does not mean peace.

“A ceasefire can be one of the tools to advance the peace process. The current statement adopted in Moscow envisages the declaration of a ceasefire on humanitarian grounds,” he added.

"Azerbaijan has changed the status quo with this operation. Azerbaijan has already liberated some of its lands. There is no line of contact. The ceasefire has been restored in accordance with international calls. However, Armenia continues to use this situation to provoke Azerbaijan", he said.