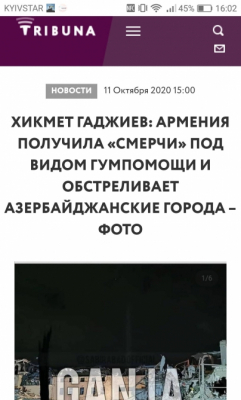 Moldova's well-known "Tribuna" portal published an article about the Armenian armed forces firing rockets on residential building in the central part of Ganja- the second largest city in Azerbaijan, far from the frontline.

The article contains Assistant to the President of Azerbaijan - Head of the Foreign Policy Department of the Presidential Administration Hikmet Hajiyev's views on Armenia's firing on Ganja and Mingachevir.

The article quotes Hikmet Hajiyev as saying that Armenia has purchased new "Smerch" missiles as part of humanitarian aid. Immediately, attacks began on the civilian population and energy infrastructure of Mingachevir. Look at the discrepancy between the civilized world and Armenia.

"Armenia's state level policy of terror continues. Armenia's impunity drives it to war crimes. Violating the humanitarian ceasefire, Armenia fired indiscriminately on the densely populated residential area of Ganja. Armenia must be stopped. On the one hand, Armenia is begging for peace, on the other hand, it humiliatingly commits an act of terror against civilians."