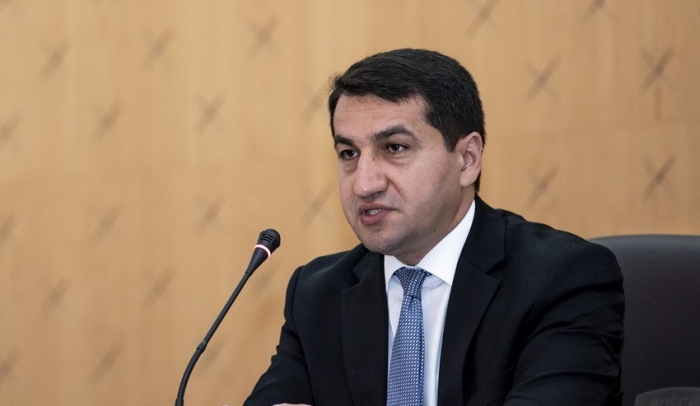 Armenian officials openly appealed to foreign nationals to participate in military operations against Azerbaijan as mercenaries under the guise of volunteers, said Head of the Department of Foreign Policy Affairs of the Presidential Administration of Azerbaijan Hikmet Hajiyev, AzVision.az reports.

“Today, you can find a lot of information about the participation of citizens of other countries in military operations against Azerbaijan as part of the Armenian Armed Forces in our occupied territories on various websites and social media networks”, Azerbaijani President’s Assitant noted.

“These individuals, participating in hostilities in the occupied territories, automatically turn into a legitimate target of the Azerbaijani army,” Assistant to the Azerbaijani president added.

Hikmet Hajiyev also commented on the relevant UN convention on the mercenaries: "Armenia clearly violates international law norms and principles and international humanitarian law by involving armed mercenaries in military operations. The United Nations Mercenary Convention, officially the International Convention against the Recruitment, Use, Financing and Training of Mercenaries prohibits the recruitment, training, use, and financing of mercenaries.

"In addition, the Additional Protocol of 2005 Warsaw Convention adopted in 2015, considers the prosecution of the persons travelling for the purposes of terrorism. These facts prove that the international community understands the urgency of the problem of armed mercenaries and the need to combat against it. Armenia is exactly doing the opposite of these conventions and even wants to legalize the use of armed mercenaries. Therefore, it once again violates international law and opposes UN bans ", Hajiyev highlighted.

President’s Assistant also noted that the legislation of a number of countries requires long-term imprisonment and large monetary fines against citizens who participate in military operations abroad as armed mercenaries:

"Harsher punishments await those who are involved in the creation and management of such an armed group. Besides, those who participate the military operations will be deprived of certain rights like voting, participation in elections, advocacy, testimony, guardianship, residence permits.

A number of European countries are taking serious measures against their citizens for joining illegal armed groups. For example, in early July this year, Tyler Vilus, who fought in ISIS in France, was sentenced to 30 years in prison. However, a French citizen named Hilbert Minasyan, who took part in the Khojaly genocide, said in an interview with the Liberation newspaper that he mobilized French citizens to take part in the war against Azerbaijan as mercenaries,” Hajiyev stressed.

During the recent battles, this process was accelerated even more. Both the previously obtained information and the incidents in the liberated Azerbaijani lands clearly prove that armed mercenaries and terrorists from foreign countries are fighting on the Armenian side. We have a lot of photo and video evidence of this. There are enough foreign citizens of Armenian origin among the mercenaries. Those individuals are involved in the attacks on the Azerbaijani civilian population. The fact that they are of Armenian origin does not justify their fighting in the territories of Azerbaijan and does not relieve them of the status of foreign fighters.

In this regard, we urge relevant countries to take serious measures against their citizens who take such a step, to prevent them from entering the occupied territories, as well as to prosecute those persons.

Those individuals automatically become a legitimate target of the Azerbaijani Army while fighting in our occupied territories and taking part in the military operations. The armed mercenaries who survive the war and return to their home countries will pose a major threat to their communities,” said the Presidential Aide.