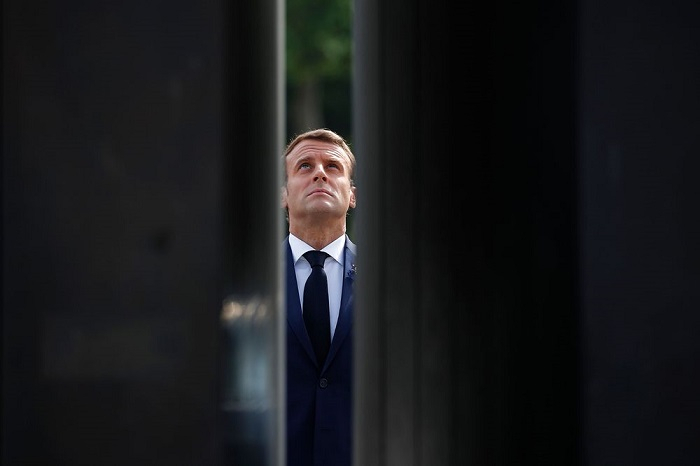 AzVision.az editorial office received an open letter from one of its readers to President of the French Republic Emmanuel Macron. Since the letter contains many interesting points and facts, we decided to publish it.

Mr. Macron , you know very well that Armenia has grossly violated all the norms of international law, ignores the requirements of the UNO and all influential organizations of the world regarding the immediate and unconditional liberation of twenty percent of our occupied territories and the return of one million displaced people to their native lands. For almost 30 years, it has relied on the patronage of the OSCE Minsk Group, co-chaired by "honey-tongued, ice-hearted" states, including France.

Moreover, when the troops of the aggressor country, which is still implementing its plans to occupy our additional territories, began to be expelled from our country like a dog, you (France, Russia) immediately considered it unacceptable and took the initiative to conduct the useless negotiations again under the leadership of this incapable body, being such throughout these years, by declaring immediate ceasefire.

If you think it is wrong to protect territorial integrity then (examples of countless wars waged by your state over the centuries) why you, France did wage a lengthy war of 116 years (1337-1453) with England, which had extensive cultural and common religious ties with you, just for a small land – Normandy (perhaps in fact this area had nothing to do with your state).

Even France did not fear that the heroic symbol Jeanne d’Arc would be killed (Janna Dark was burned alive) and did not stop fighting, but concluded a peace treaty after occupying more lands than wanted.

- Or, when Napoleon captured Moscow in 1812, it was not the Russian state that offered to negotiate with him, but the whole nation (children, women, the elderly) immediately rose up and formed a guerrilla movement, joined the army under the leadership of Denis Davudov and together with the army drove the French straight to Paris in the winter.

Mr. Macron , unlike the Armenians, who killed civilians in our occupied lands - children, women, the elderly, destroyed our cities, villages, cultural monuments and alienated their names, in France, could not stand the actions of Russian soldiers. drinking only your cognac, and sometimes swimming naked in the Seine, and using the word "bistro" that you learned from them, you immediately drove their troops out of your country, and you even cleaned up the rubbish of the horses that the Cossacks kept in your stables in the Elysee Desert.

You announced that the Azerbaijani state also involved representatives of other nations in the fighting.

First: In fact, you neither reveal the fact that the representatives of another state took part in these battles on our side, nor do you dare to apologize for giving false information to the whole world in accordance with the legitimate demands of our President Ilham Aliyev.

Second: Did only the representatives of the French people take part in the numerous wars waged by the French state in this or that country for centuries, including the liberation of your country from the German Nazis in 1940-1944? If so, then what did our compatriot Ahmadiyya, the hero of France, whom your President General De Gaulle call a friend, and an Azerbaijani by nationality, do in your country at that time?

- Do you know that the city of Yerevan you visited last year, the Iravan Khanate, where 80% of the population was Azerbaijani, Kurdish and Turks, was forcibly seized by the Russian state on October 2, 1827 as a result of the Russo-Iranian war. At the suggestion of General Paskevich and his deputy, Lazerev, who is Armenian by nationality, Armenians from Turkey, Iran and other countries were settled in these territories on the basis of a state program adopted by Russia.

Even Mirza Yagub, the eunuch of the Shah of Iran's harem, and two Armenian girls who fled from other harems and hid in the embassy, Griboyodev was killed and the embassy was set on fire for refusing to return them despite the government's strong demand. Frightened by the incident, the Shah sent a diamond called "Shah", which the Iranian government had once brought from India, to the Russian Tsar as "blood money for the slain ambassador" through his son, and the diamond is now housed in a museum in Moscow. Yerevan, the city of Azerbaijanis, was given to the Republic of Armenia, established in 1820, as the capital city, by the Azerbaijani state, and in 1936 it was renamed Yerevan.

Mr. Macron , I have no doubt that the Armenians have told you legends here as well about the Yerevan cognac on your table at the party. You know, the original owner (director) of that ancient cognac factory was Tahirov, originally from Garakilsa (now called Sisian), and his wife, Javahir khanum. The melodies you dance and even the instrument they play - the balaban - belong to the Azerbaijani people. Cognac is kept in a barrel, possibly belonging to your grandfather, which was looted by an Armenian general during the collapse of the French state in 1944.

Why do you think the world-famous genius Alexandre Duma, the pride of your nation and the beloved of all of us, was not invited to Yerevan when he came to the Caucasus in 1859, even though he was in Tbilisi, Baku and other cities? Although there were still many Armenians in France in those years, why didn't Lazerev, a well-known Armenian who said, "Talleyrand is my uncle" organize trip of the French Foreign Minister to Yerevan? Probably because the "father" of the Three Musketeers might suddenly be interested with absence of any ruins of antique buildings that according to the Armenians’ claim that the source of the high culture built by the Armenians long before the birth of Jesus Christ, that is, 782 BC, which was described as the center of the "ancient Armenian state" , not in this "legendary city" much older than Rome, Paris.

Azerbaijan is still probably the only country that has built a Catholic church and even a French-language lyceum on its territory and at its own expense, and French is taught in its schools. Our state also provides financial assistance to the Louvre and various cultural centers.

Mr. Macron , if you want to know who the peoples of the Caucasus really are, then it is enough to read your grandfather Alexandre Duma's book "Journey to the Caucasus" and not to the fabrications of the Armenians at banquets.