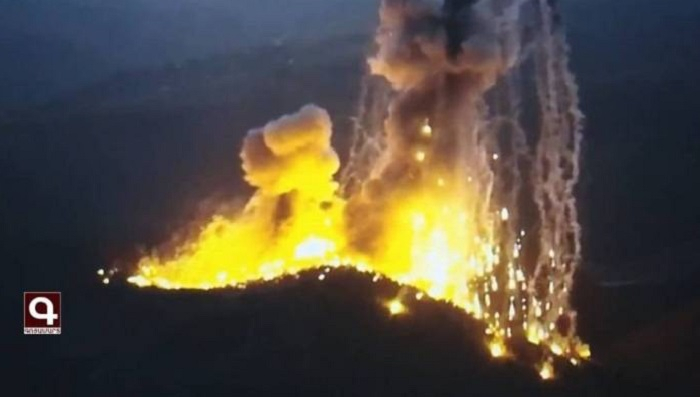 In this way, they try to create obstacles for the images of unmanned aerial vehicles, AzVision.az reports.

This is the most flagrant violation of the norms and principles of international humanitarian law, the Geneva Conventions, as well as the provisions of the relevant UN conventions and documents, and seeks to harm the Azerbaijani Army and create real threats of mass forest fires and environmental disasters in the area as well.

According to the Defence Ministry, on October 31, intelligence data was received on the delivery of a large amount of phosphorus cargo to units stationed in the defensive site of the 3rd motorized rifle regiment of the 37th rifle division of the 1st combined arms army of the Armenian armed forces in the occupied Khojavand direction.

It is noteworthy that the white phosphorus bomb was mainly used by the forces of the terrorist Assad regime, an ally of Armenia, while bombing the ceasefire zone in Idlib province, as well as in eastern Ghouta.

International law prohibits the use of white phosphorus as a weapon. Phosphorus poisoning, which poisons the body through inhalation, causes severe injury and death by mainly causing damage to the brain and lungs.