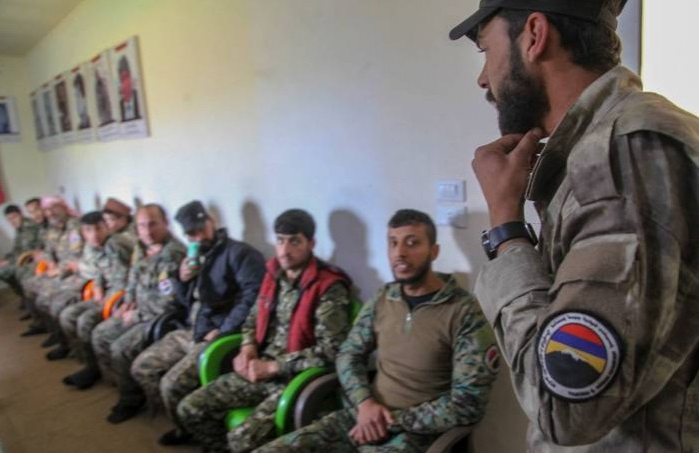 When Lebanon’s financial crisis pushed Vartkes to leave for Armenia this summer, he never imagined he would volunteer to fight in Nagorno-Karabakh.

The young Lebanese-Armenian didn’t think twice, however, when the conflict between Azerbaijani and ethnic Armenian forces erupted soon after his move.

“I wanted to go that night,” Vartkes, who asked not to be identified by his last name, said by phone. He has yet to be called to back troops in the region, which is recognized as part of Azerbaijan though governed by ethnic Armenians.

“I feel like I have to do something for the country.”

An Armenian defence ministry official has said many from the diaspora applied to volunteer without giving a precise number. Hundreds from as far afield as Argentina and the United States have rushed back to Armenia for combat training, a local instructor says.

The fighting, some of the deadliest in the mountain enclave in more than 25 years, has prompted mass mobilisation across Armenia and seen its vast global diaspora spring into action.

In Lebanon, a community of nearly 140,000 of Armenian origin, one of the world’s largest, has fundraised and sent aid despite a crippling currency crash.

Karapet Aghajanyan, the combat instructor in Yerevan, who trains local and foreign volunteers, told Reuters around 10 Lebanese-Armenians have received training in his camp.

He said they arrived from Beirut after the fighting broke out in late September to go to the frontline.

Lebanese MP Hagop Pakradounian, who heads the Armenian Revolutionary Federation party, said there was no organisation registering or sending any volunteers from Lebanon.

He said no more than 20 people had gone from Beirut to sign up, acting on their own. It was not clear if any were called to battle.

“We cannot prevent them at the end of the day. We try to dissuade them but they have this impulse,” he said. “It’s an existential war for the Armenian people, that’s why some youths are going.”

On a main highway out of Beirut, white banners hung from bridges read: “Stop Azeri aggression.”

In Lebanon’s largely Armenian town of Anjar, the head of the municipality, Vartkes Khoshian, said even families worried about paying bills had donated.

“The people gave more than they had,” he said. “We all follow news minute by minute.”

This month, Anjar commemorated one of their own who was killed in battle, Kevork Hadjian, an opera singer born in the Lebanese town who lived in Armenia.

Many residents saw him as a hero.

The singer’s 74-year-old mother, Sosse Hadjian, said she had spent days watching TV, weeping over fighters. But she didn’t know her son was at the front until her brother delivered the news of his death.

“I’m a mother who lost a son after all. It’s really hard,” she said. “But I’m also proud he joined for Armenians, for the homeland.”