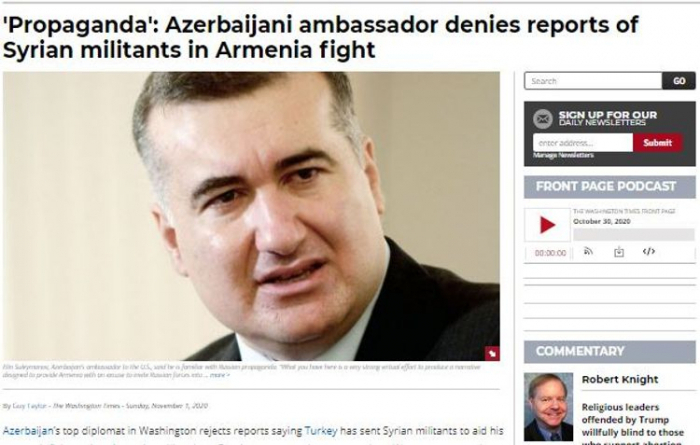 Reports about the alleged participation of Syrian mercenaries on Azerbaijan’s side in the ongoing hostilities between Armenia and Azerbaijan are Soviet propaganda, Elin Suleymanov, Azerbaijani ambassador to the US, said.

Suleymanov made the remark in an interview with The Washington Times newspaper commenting biased and ungrounded anti-Azerbaijani accusations of some media outlets, Trend reports referring to the Azerbaijani Embassy in the US.

According to the ambassador, the main goal of the Armenian side in spreading such absurd accusations is to have an excuse to invite third countries into the conflict.

He stressed that the information circulated in the Washington Post and other media outlets about the participation of Syrian fighters isn’t based on facts, because, despite the fact that more than a month has passed since the outbreak of the hostilities, no evidence of the above reports has yet been presented.

"The Armed Forces of Azerbaijan don’t need the help of such fighters," he emphasized.

Suleymanov pointed out with regret that such misinformation isn’t checked and that “lazy journalism” becomes the reason for spreading it through Western media.

Besides, commenting on the upcoming US presidential elections in the influential Newsweek magazine, the ambassador said that regardless of who wins the elections, the future administration must be objective and impartial in order to become a balanced mediator to restore peace in the region.

He emphasized that the Armenian lobby operating in America and the pressure exerted by it create obstacles in this context.

The article can be read HERE .