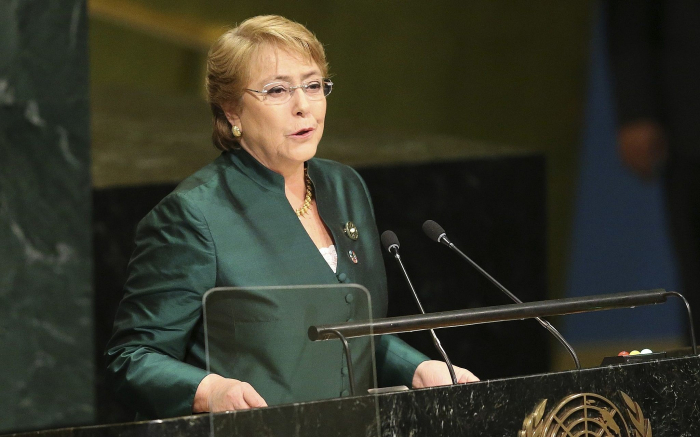 On November 2, UN High Commissioner for Human Rights Michelle Bachelet expressed alarm at continuing indiscriminate attacks in populated areas in and around the Nagorno-Karabakh conflict zone, in contravention of international humanitarian law, and warned they may amount to war crimes, AzVision.az rpeorts.

“Since the conflict reignited in September with the terrible consequences we are now seeing, there have been repeated calls, including by myself, for the parties to take all feasible steps to avoid, or at the very least minimize, the loss of civilian life and damage to civilian infrastructure, including schools and hospitals – as well as to distinguish civilians from combatants, and civilian objects from military objectives,” Bachelet said.

“Instead, homes have been destroyed, streets reduced to rubble, and people forced to flee or seek safety in basements,” she added.

“International humanitarian law cannot be clearer. Attacks carried out in violation of the principle of distinction or the principle of proportionality may amount to war crimes, and the parties to the conflict are obliged to effectively, promptly, thoroughly and impartially investigate such violations and to prosecute those alleged to have committed them,” the High Commissioner stressed.

“Such attacks must stop and those responsible for carrying them out, or ordering them, must be held to account.”

Despite an agreement reached on Friday by Armenia and Azerbaijan to refrain from deliberately targeting civilian populations, artillery strikes against populated areas were reported over the weekend. The central market in Stepanakert/Khankendi in Nagorno-Karabakh was reported to have been hit. The city of Tartar, which is some 20km from the frontline, had been hit by artillery strikes.

The biggest single loss of life was on 28 October, when 21 people were reported killed and 70 others injured in a rocket attack on the Azerbaijani town of Barda, located some 30km from the area of active hostilities. The rockets, allegedly fired by Armenian forces from Nagorno-Karabakh, reportedly carried cluster munitions. Due to their effects, the use of cluster munitions in populated areas would be incompatible with the international humanitarian law principles governing the conduct of hostilities.

“Amid deeply troubling reports that cluster munitions have been used by both parties,  I call once again on Armenia and Azerbaijan to stop using them, and to join the more than 100 States that have ratified the Convention on Cluster Munitions which comprehensively bans their use,” the High Commissioner said.

The government of Azerbaijan has indicated that some 40,000 people have been temporarily displaced by the latest fighting. According to the Armenian Foreign Minister, some 90,000 ethnic Armenians from Nagorno Karabakh have fled the current hostilities and are currently in Armenia.

“I urge the parties involved to depoliticize the issue of providing human rights and humanitarian access to all areas affected by the conflict – including by my teams to the relevant areas – so there can be effective monitoring of the human rights situation on the ground,” she said.

Under international humanitarian law, the wilful killing of protected persons constitutes a grave breach of the Geneva Conventions and therefore constitutes a war crime. Only a competent court can determine whether a war crime in a specific instance, has been committed and rule on such an issue.

Amid the hostilities, the number of COVID-19 cases continues to increase, with new reported cases on 1 November totalling 2,441 in Armenia and 1,175 in Azerbaijan. No updated information is available concerning the COVID-19 situation in the Nagorno-Karabakh conflict zone.

“The outbreak of hostilities clearly poses a direct threat to public health with already limited resources diverted from combatting a health emergency to waging a long-standing conflict. The fighting is also strikingly in opposition to the UN Secretary-General’s call for a global ceasefire amid the pandemic,” Bachelet said.

“I call once again on all parties to the conflict to uphold their obligations under international humanitarian law to protect civilians and civilian infrastructure, abiding by the principles of distinction, proportionality and precaution and avoiding the use of explosive weapons with wide area effects in populated areas,” the High Commissioner stressed.

“As the loss of life continues and the suffering of civilians deepens, I appeal again for an immediate halt in the fighting and urge all parties to abide by a humanitarian ceasefire and engage in negotiations to find a peaceful and durable solution to this conflict that has wrought so much destruction in the region,” Bachelet said.