Pashinyan's failure or what went wrong in Armenia? 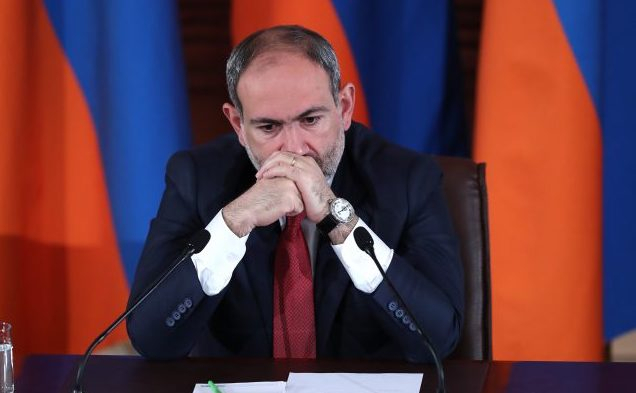 The military-political leadership of Armenia is not able to logically explain the miserable situation caused by military defeats and put forward a reasonable position.

Armenian Prime Minister Nikol Pashinyan tries to spread information claiming that Turkey is a side of the conflict and mobilizes mercenaries from the Middle East in military operations. Pashinyan never gets tired of repeating lies about Turkey and the involvement of mercenaries in his conversation with the leaders of the countries to whom he begs, interviews with foreign media outlets and in his appeals to his nation.

Pashinyan claimed that Turkish fighting aircrafts allegedly took part in military operations. Armenian territories were hit by ballistic missiles from Azerbaijan, but he did not understand that such cases could be detected easily within the military-technical potential of any country. If no serious opinion has been expressed on the issue so far, all this is nothing but the imagination of the Armenian leadership.

Pashinyan claims participation of thousands of mercenaries in fighting on the Azerbaijani side, saying that there are facts without presenting any of them. The Prime Minister considers the terrorist act in any country of the world as a chance to use it against Azerbaijan. For instance, in an interview with Rossiya-1 Pashinyan says that what happened in Dagestan is terrorism, there are alleged mercenaries in Azerbaijan, and tries to prove these two issues on a very primitive level, even below the average journalist. He sends messages to Iran about the threat of terrorism, accuses Israel of collaborating with the devil.

In his interview with ‘The Jerusalem Post’, Pashinyan not only accused Israel of supporting terrorism but also allegedly creating an alliance against the Jewish state in face of Azerbaijan and Turkey.

All these claims show that this person has negative qualities such as lies, blackmailing, populism, and foolery. He is lying, claiming that Turkey is involved in the conflict and Azerbaijan involves mercenaries. Why should Azerbaijan, which is stronger than Armenia in terms of manpower, modern military equipment and weapons, financial capabilities, the preparedness of the army and other parameters need help from another country or mercenaries?

Pashinyan is blackmailing the world's major powers with the "terror" and "far-reaching plans" of the Azerbaijani-Turkish union. When he came to power, the Prime Minister, who deceived the Armenian people with his populist promises thought that he could deceive the world community and world leaders in the same way. All this creates a very negative opinion about him. It is no coincidence that the international community has already formed the impression of a political fool about the Armenian leader.