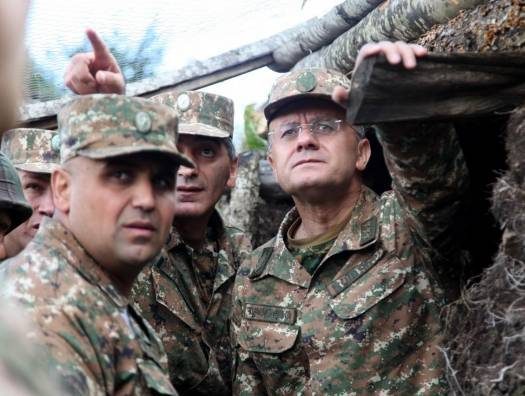 During the fierce battles in Shusha, the ex-Minister of Defense of Armenia, Colonel-General Seyran Ohanyan, was seriously wounded.

Earlier, leader of the separatists Arayik Harutyunyan "appointed" Ohanyan as the military commandant of Shusha.

Azerbaijan's official sources have confirmed the reports of Ohanyan's being wounded. At the same time, Ohanyan's son was reportedly wounded.

The commander of the 2nd motorized rifle battalion of the 366th regiment, Seyran Ohanyan, was one of the perpetrators of the genocide committed against the civilian population in the Azerbaijani town of Khojaly on February 26, 1992.

He is also known for the construction of defensive fortifications in the occupied territories of Azerbaijan, which the Armenian propaganda called "Ohanyan's unbreakable line."

Azerbaijani soldiers broke through fortifications built by the Armenian troops during counter-offensive operations.