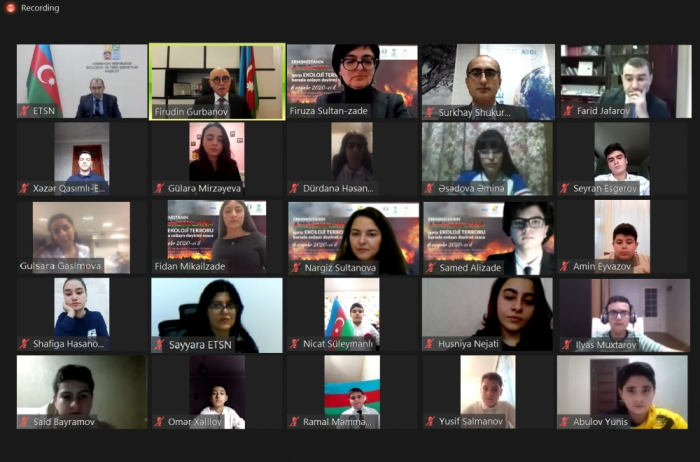 An online roundtable, by the initiative of Leyla Aliyeva, Vice President of the Heydar Aliyev Foundation, Founder and Head of the IDEA Public Association, was held on the topic "Environmental terrorism of Armenia against Azerbaijan" On November 6, 2020, AzVision.az reports citing the IDEA.

The event, which was held amid forest fires destroying natural resources in the Armenian-occupied territories of Azerbaijan, which occurred as a result of shelling of civilians located in different regions of the country, also coincided with November 6, the International Day for the Prevention of Exploitation of the Environment, environment during war and military conflicts.

The main goal of the round table, organized by the IDEA Public Association, the Ministry of Ecology and Natural Resources, the Ministry of Education, the Azerbaijan Youth Foundation, young ecologists of the Republican Network Center for the Development of Children and Youth "Green Network" and the socio-ecological center "EcoSphere", is to inform the international community about environmental crimes committed by Armenian terrorists on the territory of Karabakh, liberated by the Azerbaijani army, and in other districts along the front line, on the brutal exploitation of the natural resources of Azerbaijani land by Armenia and drawing attention to this problem.

Media representatives, eco-volunteers and young eco-leaders who attended the discussion were informed about the ecological terror of Armenia against Azerbaijan, the spontaneous exploitation of natural resources located in the occupied territories of Azerbaijan, the violation of the ecological balance and the pollution of drinking water with industrial waste.

During the event, the issues of restoring natural resources of Azerbaijan, which were plundered by Armenia, as well as involving young people in this process and their potential role, were discussed.

The participants of the event called all environmental organizations and the general public to inform on the occasion of "November 6 - International Day for Preventing the Exploitation of the Environment in War and Military Conflicts" and to protest against the environmental aggression and terrorist intentions of Armenia.