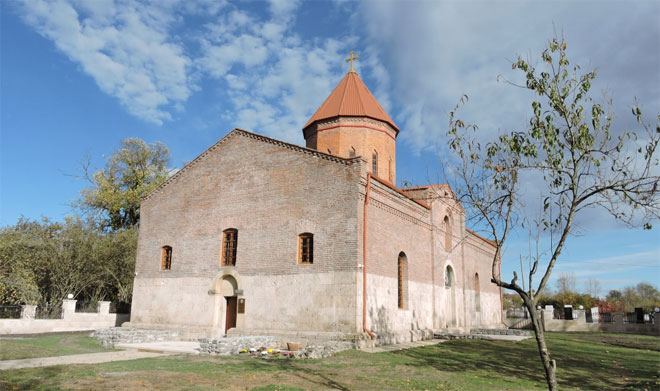 The Albanian Church of the Holy Virgin Mary, located in Nij village of Azerbaijan’s Gabala district, has been overhauled by the Heydar Aliyev Foundation.

The opening ceremony was held on November 7 after the restoration of the Albanian Church of the Holy Virgin Mary.

In an interview Chairman of the Albanian-Udi Christian religious community of Azerbaijan, Robert Mobili said that the reconstruction of the Albanian Church of the Holy Virgin Mary in Nij village by the Heydar Aliyev Foundation and the transfer of this church to the community is a historic event.

The restoration of this historical heritage testifies to the importance attached to the multicultural values in Azerbaijan.

Mobili stressed that different peoples live together in this land.


“One of the prohibitions of Christianity says: Do not kill!” Mobili said. “But we see that the Armenian religious leaders are doing the opposite.”

“On the other hand, let's look at the realities of Azerbaijan: here representatives of different peoples and cultures live in peace together,” chairman of the Albanian-Udi Christian religious community of Azerbaijan. “Today the Udins are the heirs of the Albanian Church and have preserved Christianity.”

“The Armenians changed the Albanian churches in the occupied territories in accordance with the Armenian style,” Mobili said. “Along with the Albanian temples, today we see that the Armenians, who have moved to the Nagorno-Karabakh region, are destroying Islamic temples, monuments, historical sites, and changing the architectural style while in Azerbaijan these religious temples are being restored."

On behalf of the community, Mobili thanked the Heydar Aliyev Foundation and its leadership for the reconstruction of the Albanian Church of the Holy Virgin Mary.

Gabala district is one of the districts in which there was a system of multicultural values historically observed in Azerbaijan, namely, three religions such as Christianity, Judaism, and Islam, religious communities of ethnic groups professing these religions, churches, synagogues, and mosques that are sanctuaries, as well as various national minorities and ethnic groups. About 4,000 out of 10,000 Udis in the world live in Nij village.

The restoration and reconstruction of the Azerbaijani historical and religious monuments, including mosques, churches, synagogues, the construction of new prayer houses are an integral part of the policy being pursued by Azerbaijan in this sphere.

The Heydar Aliyev Foundation is also directly involved in the implementation of this policy.