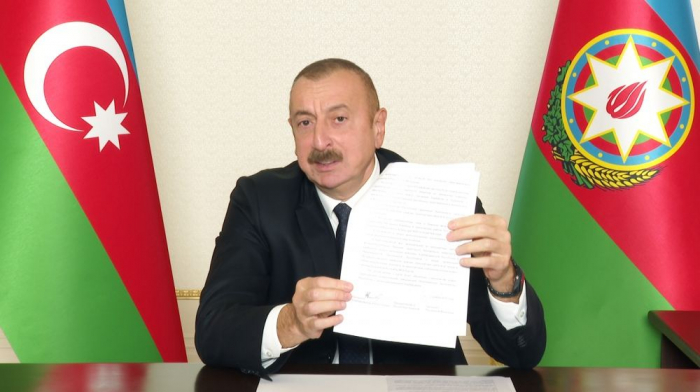 This statement allows us the opportunity to return our other occupied regions – Aghdam, Lachin, Kalbajar – without bloodshed, President of the Republic of Azerbaijan Ilham Aliyev said addressing the nation on Nov. 10, Azvision.az reports.

“By liberating Shusha, by liberating 72 settlements on 9 November, by liberating about 300 settlements since 27 September, we broke the back of the Armenian army. Pashinyan was forced to sign the statement – in a very pathetic and miserable state. I have signed this statement with great pride and joy because this statement puts an end to the long-standing occupation. This statement allows us the opportunity to return our other occupied regions – Aghdam, Lachin, Kalbajar – without bloodshed. There is a very short deadline, these districts will be returned to us by the end of this month. This is great happiness," said the president.

"I take this opportunity to congratulate the residents of Aghdam, Lachin and Kalbajar districts, all the people of Azerbaijan on this occasion. Every time an occupied district or city was liberated, I congratulated the residents of those cities and districts. I can imagine what it means for them,” the head of state said.