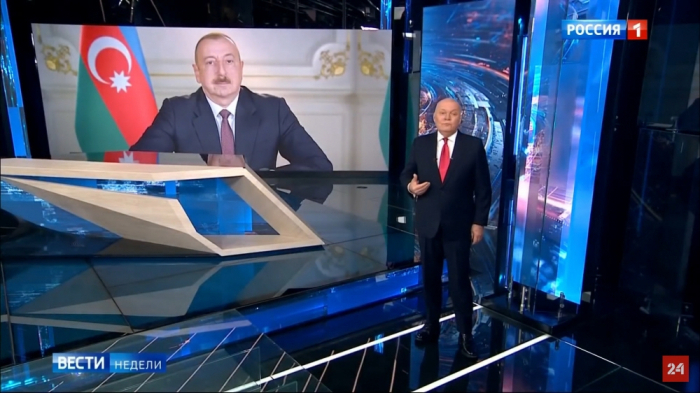 Kiselyov said that Pashinyan’s dance at Shusha was considered as a provocation in Baku.

"Ilham Aliyev declared that during his presidency Karabakh will not have a status," Kiselyov said.

The journalist highlighted that Azerbaijan is currently celebrating its victory in the Second Karabakh War. The Azerbaijani army has unprecedented power and this is all due to President Ilham Aliyev.


Kiselyov recalled that Pashinyan refused to negotiate with Azerbaijan, saying "Karabakh is Armenia and the point," and went to Shusha to dance instead of negotiations. Pashinyan’s "self-confidence" was aimed at deceiving Armenia and Karabakh. The underestimation of the situation eventually forced Pashinyan’s incompetent team to deceive its people from beginning to end during the fighting.

"What will happen now?" Kiselyov asked, adding that the Armenian army had been destroyed. Stressing that Armenia is currently going through difficult times, Kiselyov recalled that the wound of loss has healed over time, and divided it into stages such as denial, anger, trade, depression and acceptance. The Russian journalist said: “Armenia has already passed the stage of denial and is now experiencing the stage of anger. The next stage is trade.