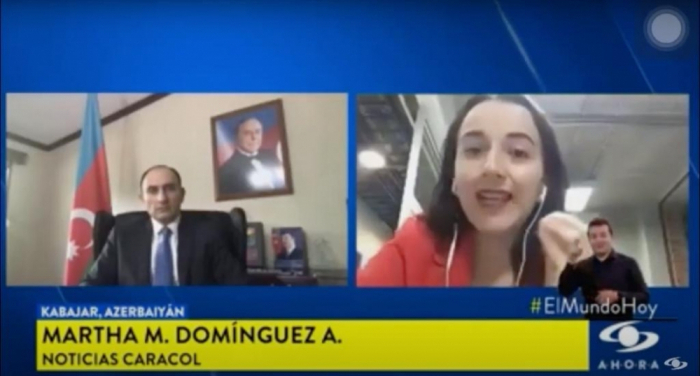 ‘El Mundo Hoy’ program of Colombia's 'Caracol' TV channel broadcasted a reportage on the statement signed by the presidents of Azerbaijan, Russia and Armenian PM and an interview with Azerbaijani Ambassador to Mexico Mammad Talibov, Embassy of Azerbaijan in Mexico told AzVision.az.

In an interview, the ambassador spoke of the importance of the statement for lasting peace in the region.

He said that about one million of our compatriots, who were displaced from their homeland as a result of ethnic cleansing by Armenia and have been living as IDPs for the last 30 years, will return to their homeland.

The program also provided information on the history of the conflict and showed video footage on the course of operations and the damage caused to the environment and infrastructure by Armenians.

The ambassador gave information about occupation of the internationally recognized territories of our country, including Karabakh and seven surrounding regions by Armenia for nearly 30 years. Talibov also noted that the presence of the Armenian occupying forces in the sovereign territories of Azerbaijan and the non-compliance with the relevant UN Security Council resolutions demanding the liberation of these territories have always been a major threat to lasting peace in the region.

Discussing the bilateral relations with Colombia, the ambassador said that the Colombian Foreign Ministry supported the current deal by issuing an official statement. There is a positive political dialogue between the two countries and continuous cooperation within international organizations.