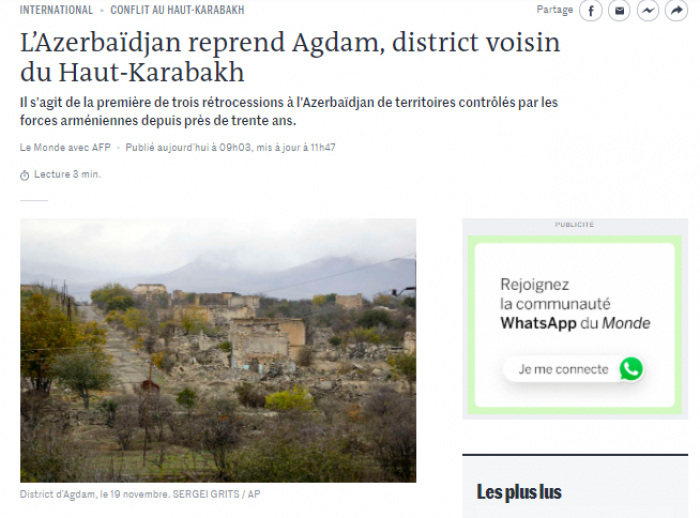 The French newspaper Le Monde published an  article  on the return of the Aghdam region to Azerbaijan on November 20, which has been under the control of Armenian separatists for 27 years.

This is the first of three handovers to Azerbaijan of territories controlled by Armenian forces for nearly thirty years and a war in the 1990s that left tens of thousands dead as well as hundreds of thousands of displaced, especially the Azerbaijani population of Aghdam.

1960 Russian peacekeepers are also being deployed in Karabakh and surrounding areas to monitor the ceasefire..

The article points out that Armenians were slaughtering their cattle and harvesting their fruits before leaving the region:

"Some people set fire to their houses leaving nothing but ruins for the Azerbaijanis."

“In Agdam, a ghost town for almost thirty years where the separatists had a rear base, Armenian soldiers bulldozed and burned their local headquarters on Thursday, before leaving the area.

At the end of the war in the 1990s, the opposite happened in the 1990s, when the local Azerbaijani population was forced to leave their homes

The end of hostilities agreement marks a humiliating defeat for Armenia. In the end, it is noted that the ceasefire agreement in Karabakh caused great protests in Armenia and Prime Minister Nikol Pashinyan was called a "traitor."