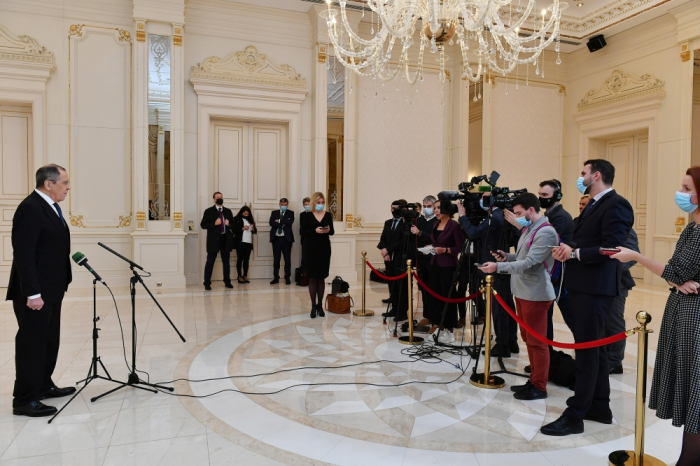 On 21 November, following a meeting with President of the Republic of Azerbaijan Ilham Aliyev, Russian Foreign Minister Sergey Lavrov addressed the media and responded to questions from journalists.

AzVision.az presents the speech of the Russian Foreign Minister and his answers to questions.

- We have completed the negotiations with the President of Azerbaijan, Ilham Heydar oglu Aliyev. The talks were held in the format of our interagency delegation and then additional consultations were held in a narrow format. The main conclusion is that the relevance and the absence of any alternative to the agreement reached by the leaders of Russia, Azerbaijan and Armenia on 9 November, the agreement that stopped the bloodshed and laid the foundation for a long-term settlement of the situation around Nagorno-Karabakh, has been fully confirmed. The President of Azerbaijan today paid special attention to the need for consistent and conscientious implementation of all the components of the joint trilateral statement. Our positions also completely coincide with regard to the need for creating conditions for the restoration of inter-religious and interethnic peace, coexistence and reconciliation. We have discussed a number of specific directions that will contribute to this and which we will jointly implement together with the Azerbaijani and Armenian sides.

Among other areas, we are interested in the international organizations of the UN system, the International Red Cross, being actively involved in solving humanitarian problems and working together with Russian peacekeepers and with the Center for Humanitarian Response. The President of Azerbaijan has specific proposals on how to make this work more effective, and we discussed them with interest today. We will continue to work together in this direction. In general, on matters related to bilateral relations, we have noted consistent and progressive development of our strategic partnership and outlined specific steps to return to face-to-face events as soon as the situation with the coronavirus infection allows. This includes the intergovernmental commission, the interregional forum, the Baku Humanitarian Forum and the Forum on Youth Initiatives. We have ample instruments for the development of bilateral cooperation and, of course, we will extensively use them in the future. We have discussed our cooperation in international organizations – the UN, the OSCE, where we have coinciding positions on most key issues. We also have joint projects within the Black Sea Economic Cooperation, there is such an organization, and within the framework of interaction of the five Caspian littoral states. So we consider the results of the talks to be very positive, as they allow us the opportunity to report to the President that his instructions on the visit of the interagency delegation to Armenia and Azerbaijan have been fulfilled. We will now sum up the results and report on our assessments, which, I hope, will form the basis for additional decisions on the development of our ties. I am ready to answer a couple of questions.

- Thank you very much, Sergey Viktorovich. “Kommersant” newspaper. Russian intelligence bodies warned earlier that the United States and its NATO allies are trying to undermine the 9 November agreement and squeeze Russia out of the Caucasus. Have you discussed this issue with your partners here in Baku and in Yerevan? What did they tell you? And maybe this issue was raised at your meeting with the Minsk Group co-chairs in Moscow?

- At the beginning of our today's talks here in Baku, the President of Azerbaijan noted in general terms that not everyone was impressed with the agreement reached on 9 November. We also note, as you have just mentioned, that there have been attempts to question these agreements, but I think that these attempts will not be crowned with success. First of all, because the co-chairs of the OSCE Minsk Group – Russia, France and the United States – have repeatedly emphasized the need to resolve the Nagorno-Karabakh problem on the basis of the very principles that are now being materialized in the development and implementation of the trilateral joint statement of 9 November. Secondly, of course, we always emphasize – as we also did during the visit to Moscow of the OSCE Minsk Group co-chairs, our French and American colleagues – in relation to this and any other conflict that it is first of all necessary to stop people dying, stop people dying in bloody wars, so that a peaceful life could be established, so that religions and cultures could coexist and people representing different ethnic and confessional groups could live together in peace and security. If we put this at the forefront, then I do not see any reason that would give at least some opportunity to interpret the agreements of 9 November in a negative way or to question them. If we put geopolitical ambitions first, then we cannot do anything about this. But we will firmly reject such attempts and will concentrate on the implementation of the agreements that meet the fundamental interests of the peoples living in this region.

- Mr. Lavrov, the trilateral statement provides for the unblocking of economic and transport links in the region. What contribution do you think the implementation of this paragraph can make to the further expansion of economic cooperation between countries of the region?

- I think this is one of the key provisions. We spoke about this in great detail today. The President of Azerbaijan is sincerely committed to realizing as soon as possible the opportunities that open up in connection with the unblocking of transport, economic and infrastructure communications and projects. Vital routes intersect in this region, including North-South and East-West. Incidentally, the Turkish side and the Iranian neighbors of Azerbaijan and Armenia are involved in them. In fact, when all the restrictions that have existed for almost 30 years are removed, the prospects seem very impressive. We talked about this in detail today. And the way the unblocking of all these ties will allow the region's economy to breathe deeply will probably meet the task of quickly improving the living conditions of people who will now be free from any restrictions, and this will also be the most important material prerequisite for inter-religious and interethnic peace to be established here. So this is one of the key areas of our work in the very near future.

- You said that your position on many issues fully coincides with that of the Azerbaijani side. If we talk about Turkey's role specifically in this settlement and in general, can you please tell us if everything also fully coincides? To what extent was the Turkish factor discussed today? Perhaps there is something new? And is there any chance that Turkey's influence could squeeze Russia out, so to speak?

- President Putin spoke very exhaustively on this topic in his interview on 17 November. Turkey is a real factor in this region. In fact, not only in this region, but beyond. Turkey is our partner in many areas. Of course, sovereign Azerbaijan has the right to choose its foreign policy partners, just like sovereign Armenia chooses its foreign policy partners. Therefore, perhaps, the art of politics is to fully take into account all the factors that really affect the situation in a particular region when promoting any initiatives. And the success of the negotiations – protracted and difficult talks which took place on the initiative of President Putin together with the President of Azerbaijan and the Prime Minister of Armenia was, in general, largely due to the realistic assessments that all the participants in the negotiations expressed and were guided by. So, as you know, we have an agreement with the Turkish side, which is supported by Azerbaijan, to establish a Russian-Turkish monitoring center on the territory of Azerbaijan. It will remotely monitor the implementation of the ceasefire in and around Nagorno-Karabakh using technical means. This will be an additional factor that will make it possible to ensure the stability of the ceasefire, in which Russian peacekeepers are playing a key role, of course.

- A joint statement was signed by the leaders of Azerbaijan, Russia and Armenia on 10 November. How would you assess the significance of this document?

- This is the key document that will finally, after 30 years of a frozen conflict, pave the way for peace in this region. The document fully meets the interests of both the Azerbaijani and Armenian population of this region and is aimed at ensuring that the conditions that have now developed and the implementation of which will allow people who have always lived here to return to coexistence, to live side by side with each other regardless of ethnicity, regardless of religious beliefs, in peace and security. This is the most important factor. Thank you.