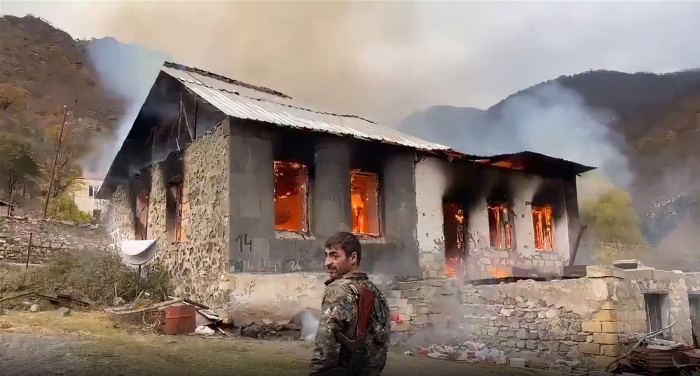 The “scorched earth” strategy of Armenians leaving the Kalbajar region of Azerbaijan did not escape the attention of the European Commission (EC), an article posted at the Europe Diplomatic online magazine said.

“We take note of various information and various complaints that come from the parties in the situation regarding Nagorno-Karabakh and surrounding regions. Since there is no direct access to the territories, it is very difficult for us to verify these statements, and therefore I will not be able to answer specific accusations that concern the situation in these territories, but what is important, is the observance of the ceasefire regime, which must be fully implemented” the article quoted spokesperson for the EC.

“The media reports on the “scorched earth” strategy used by the Armenians leaving the Kalbajar region of Azerbaijan, have caused a great deal of concern of the ecologists, who have pointed at the disaster of the forests set ablaze, and the intentional destruction of unique flora and fauna of the mountains,” the report said.

The article explains “scorched earth” has been reportedly used by local inhabitants of the Kalbajar region, while they were abandoning the area.

“The ‘scorched earth’ strategy is a war crime as defined in the 1977 Geneva Conventions. This barbaric strategy of destroying anything that could potentially be used by the enemy is condemned by international law, and the procedures concerning war criminals are under the jurisdiction of International Criminal Court in The Hague. It is a permanent international criminal justice body whose competence includes the prosecution of those responsible for genocide, war crimes, crimes against humanity, as well as military aggression. Established by the 1998 Rome Statute, the Court has officially began its work on July 1, 2002,” the report said.