The environmental cost of conflict -EURACTIV 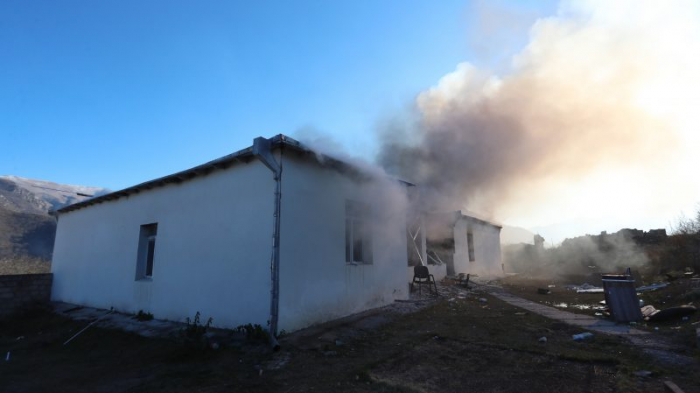 On 9 November, the leaders of Azerbaijan and Armenia signed a Russia-brokered agreement to end the military operations in Karabakh that had started on 27 September and inflicted massive losses on the Armenian side. According to the joint statement, the Armenians had to leave the occupied Kalbajar region by 15 November (later extended to 25 November), Aghdam region by 20 November and Lachin region by 1 December. While the peace deal guaranteed Azerbaijan’s victory and was thus a cause for great celebration in Azerbaijan, Armenians reacted with fury and deep frustration.

Despite the fact that the Armenians moved to these Azerbaijani regions only after their occupation in the war of the early 1990s, they found it unacceptable to hand those territories back to Azerbaijanis. Media reports showed Armenians in Kalbajar burning houses, cutting down trees, and setting fire to forests before they left the region. It has been reported that they did not shy away from burning down schools and hospitals and butchering the cattle. Unfortunately, these acts have not received an adequate reaction from the international institutions and NGOs that deal with environmental issues.

All these unlawful acts need to be strongly condemned; but, more dramatically than demolishing the buildings, the inhumane attacks against the environment shocked Azerbaijani society and fueled anger, primarily among those people who had been displaced by Armenia from these territories back in the 1990s. Unfortunately, this environmental terror against the occupied regions of Azerbaijan started at the very beginning of the occupation. The region’s ecosystem, wildlife, and natural resources have been violently destroyed over the last 27 years.

On many occasions, the international organizations sounded alarms against the devastation of the environment of the Karabakh region and beyond caused by the occupation. In January 2016, the Parliamentary Assembly of the Council of Europe adopted Resolution 2085 that condemned the fact that the occupation by Armenia of Nagorno-Karabakh and other, adjacent areas of Azerbaijan had created humanitarian and environmental problems for the citizens of Azerbaijan living in the Lower Karabakh valley. They called on the Armenian authorities to cease using water resources as tools of political influence.

According to the report “Environment and Security: Transforming Risks into Cooperation – The Case of the Southern Caucasus” prepared by the Organisation for Security and Cooperation in Europe (OSCE), the UN Development Programme (UNDP), and the UN Environment Programme (UNEP) in October 2004, the occupation represented a major challenge for the environment and the security of Azerbaijan, and posed specific problems such as the long-term impacts of overuse of pastureland, clearing of forests, stockpiling of waste, and irrational use of land in Nagorno-Karabakh.

The report of the environmental assessment mission led by the OSCE to fire-affected territories in and around the Nagorno-Karabakh region, conducted from 2 to 13 October 2006, concluded that the areas burned were extensive and the impacts on people, the economy, and the environment were significant. The report prepared by the Ministry of Foreign Affairs of the Republic of Azerbaijan also paints a shocking picture of illegal economic and other activities in the occupied territories of Azerbaijan: “The exploitation of the natural resources accompanied by associated ecological disasters, such as tailing dumps and water pollution, has reached such a fast and unobstructed pace that even Armenia-based environmental organizations, including the Pan-Armenian Environmental Front (PAEF), raised [a] red flag.”

The environmental crimes committed by Armenia for many years are also evidenced by Azercosmos satellite images. These pieces of evidence show that the most valuable examples of flora and fauna in the occupied territories have been obliterated. According to preliminary estimates by experts, the damage to the environment and natural resources is valued at about $265.3 billion.

It is worth noting that the total forest area under occupation was 247,352 hectares; about 13,197 hectares of these are of particular importance. More than 460 wild plants and shrubs grow in these forested areas. Of these, 70 are endemic and do not grow naturally anywhere else in the world. In the Kalbajar region, 968 hectares of trees included on the IUCN Red List were also cut down and sold abroad.

Tofig Mammadov, the director of the Institute of Dendrology of Azerbaijan National Academy of Sciences, stated that 21 endemic Azerbaijani species, as well as hundreds of rare and endangered plants, were destroyed by the occupying forces of Armenia. Rare forest species including platan (plane tree), nut trees, oaks, and other valuable tree species in Basitchay State Nature Conservation, Aras State Nature Reserve, Qaragol State Nature Conservation Area, and the State Nature Reserves of Lachin, Gubadli, and Dashalti regions have been plundered and subjected to felling and cutting for timber that was exported from the occupied territories for furniture, barrel, and rifle production. Many of these tree species are now on the verge of disappearance.

To put it briefly, as a consequence of the occupation, Nagorno-Karabakh has experienced massive destruction of the ecosystem that can be characterized as “ecocide,” which calls for assigning criminal responsibility.

As a result of the liberation of the territories from occupation, Azerbaijan has discovered new incidences of environmental terror carried out by the Armenians on these lands for almost 30 years. In order to ascertain the true condition of the flora and fauna of the liberated territories, it is necessary to conduct an appropriate investigation and objective scientific assessments on the spot and determine the damage caused to nature.

Meanwhile, Azerbaijan is planting trees in the liberated Zangilan and Fizuli districts, and has already embarked on initiates to restore the ecosystem of the liberated territories. However, expanding biodiversity and rehabilitating the ecosystem in the region will require the development of a comprehensive program. It may take decades to restore the flora and fauna, as some plants have been completely destroyed and others are on the verge of extinction. As soon as specialists assess the damage caused to the environment, it will be possible to determine the legal mechanisms to bring those who are responsible for the crime of ecocide to justice and demand compensation.

To sum up, the hostile attitude toward nature and the eco-terror in Nagorno-Karabakh and the adjacent regions of Azerbaijan not only pose a serious threat to the ecological balance, flora and fauna of Azerbaijan but also, along with other provocative actions, instill further hatred and constitute a serious threat to peace and security in the region. Ultimately, this brutal behavior toward the environment, this ecocide, will impede the process of reconciliation between these two countries that are bound together by geography and history.