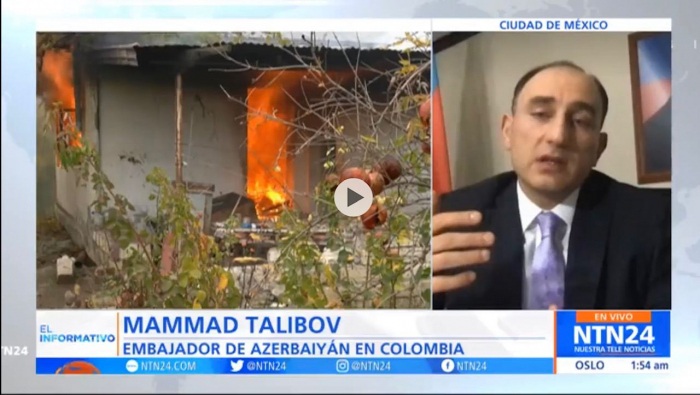 Colombia's famous 'NTN24 TV' channel broadcasted a reportage on the Armenian-Azerbaijani conflict and a statement signed by the presidents of Azerbaijan, Russia and the Prime Minister of Armenia, as well as an interview with our ambassador to this country Mammad Talibov.

The ambassador said that the Nagorno-Karabakh region and surrounding areas, which were recognized by all members of the international community, have been under military occupation by Armenia for about 30 years and 1 million Azerbaijanis have been displaced from their homes. It was also noted that the resolutions adopted by the UN Security Council have not been implemented by the occupant country for 27 years.

Regarding the violation of the signed statement and the possibility of resumption of hostilities, the diplomat said that Armenia immediately violated the agreed humanitarian ceasefire three times during the operations and fired on cities outside the conflict zone, killing 94 civilians and injuring more than 400. Besides, Armenia's terrorist organizations such as ASALA and Dashnaktsutyun, the threat of provocation and terrorist acts is being considered, and Russia and Turkey are monitoring the ceasefire and the terms of the declaration. Talibov also expressed his hope that Armenia would abandon his aggressive policy and abide by the terms of the agreement. He also noted that from now on Armenia must respect the territorial integrity and sovereignty of neighboring countries, and the Armenian people must learn to live in peace with neighboring nations.