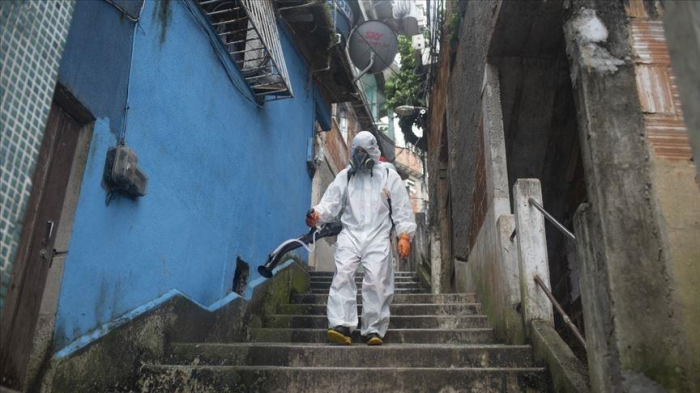 The handling of the new coronavirus pandemic has put Brazil in the worst position in the world in a ranking by the Lowy Institute, an Australian think tank.

The organization assessed nearly 100 countries on 6 criteria, including both absolute and population-related cases and deaths, and measures taken to test people over time.

Brazil's average grade in the “Covid Performance Index” was a poor 4.3.

“For almost all countries of the Americas, COVID-19 was an unremitting struggle over the course of 2020,” Lowy’s report says. “Consistent underperformers included some of the largest regional players — Brazil, Colombia, and the United States”.

“Although the rate of new infections appeared to stabilise towards the end of the year [2020], the region as a whole continued to see the virus spread”.

“Unfortunately, we never had a good conductor of the orchestra, who would be the Health Minister,” Orellana told the Anadolu Agency. “The President of the Republic [Jair Bolsonaro] has unfortunately, from the beginning [of the crisis], minimized the epidemic, classifying it as a ‘little cold’, making it very clear that his priority would be the economy, and not saving people's lives”.

“Brazil is today one of the worst countries in the world for someone to have COVID-19. Probably, those who have COVID here have the greatest chances in the world of dying, due to this sanitary negligence,” he says.

According to Orellana, problems started in March 2020, “when then Minister of Health Luis Henrique Mandetta advised local governments not to mass test, according to a mistaken view that considered tests to be a waste of public money”.

At the time, the federal government directed only the evaluation of patients with severe respiratory symptoms, what specialists consider a wrongful policy as patients are treated when it is already too late.

The epidemiologist however recognizes the shared responsibility of state and municipal governments with that of Bolsonaro's administration.

“It ends up being a cascade of effects, of mistakes shared by all levels of government,” Orellana said.

“Undoubtedly, there were great difficulties in policies, such as those of mass testing, or of physical distance, which would allow the circulation of the virus to be contained in the initial moments, before it violently spread”. According to him, “you see this catastrophe appear in Brazil since March 2020”.

“Many state and municipal governments, whether they supported the president or not, ended up making serious failures in containing the pandemic,” Orellana said.

Although vaccination was not included in Lowy's study, the epidemiologist says that there are also problems in this aspect in Brazil.

“Taking a leap towards the end of 2020, we are now experiencing this vaccine drama, in which the Health Ministry doesn't take the lead”, he said.

“In Brazil we have two of the largest vaccine production factories in Latin America and, oddly enough, we are one of the most backward countries and the one which invested the least in campaigns”. For him, Brazil’s handling of the pandemic is “a true horror show, a sequence of errors”.=

“Some countries have managed the pandemic better than others, but most countries outcompeted each other only by degrees of underperformance,” Lowy’s report said.

Smaller nations, with less than 10 million inhabitants, appear to have some advantage. It is the case of Uruguay.

“Uruguay stood out as a positive outlier in comparison”, states the report.

The 3.4 million-inhabitants South American country, which had 415 confirmed COVID-19 deaths so far, is the top American country in Lowy’s ranking, which 75.8 grade has put it in a 12th position among the 98 assessed countries.

“In general, countries with smaller populations, cohesive societies, and capable institutions have a comparative advantage in dealing with a global crisis such as a pandemic,” the report said.

China was not included in the rankings because of what the think tank described as a lack of publicly available data on testing. Taiwan’s data was then provided separately from China’s.