Applicant with highest score shares impressions from meeting with President 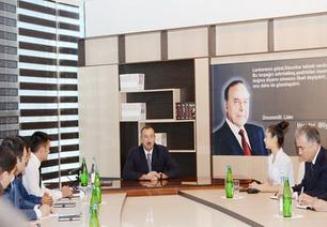 On Friday, applicants from the southern region of Azerbaijan who gained highest scores on entrance exams to higher schools met with President of Azerbaijan Ilham Aliyev who attended opening of Youth Center in Lankaran.
“It was a great honor for us to meet Azerbaijani President Ilham Aliyev,” a participant of the meeting Nadir Mehdiyev told 1news.az.

“The issues that the Azerbaijani President touched upon and the conversation he had with us made a lasting impression on us. Everyone was very excited before the meeting, but sincerity of the Head of State help to relieve the stress,” noted Mehdiyev.

He said at the meeting the President touched upon a number of issues some of which were very interesting for him as a future student.

First of all, it was an education abroad and the conditions of dormitories of higher schools in Azerbaijan.

“I would like to further my education abroad in Europe or America either after my second year at university or master`s degree. As you know, the State Program on Education of Azerbaijani Youth Abroad will end in 2015. But at the meeting the Head of the State stated that the program will be continued which was a very good news for me,” he added.