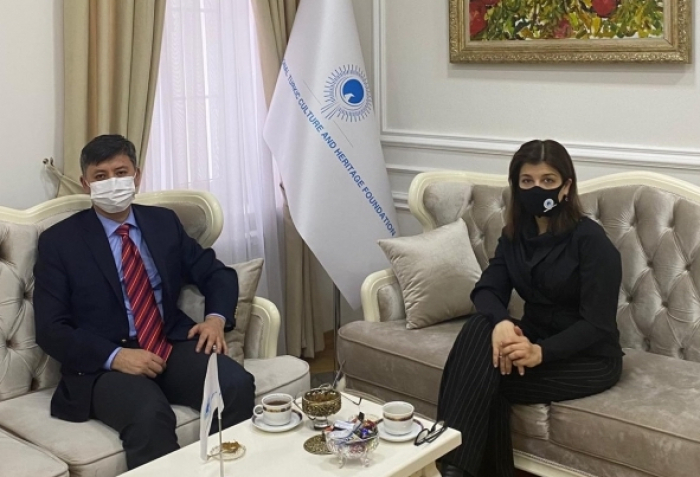 The International Turkic Culture and Heritage Foundation has hosted a meeting between the president of the Foundation Gunay Afandiyeva, and the Charge d'Affaires of the Kyrgyz Republic in Azerbaijan Mukhamed Lou.

At the meeting, the President of the Foundation highlighted the large-scale activities of the organization, the events held during the pandemic aimed at promoting the rich material and cultural heritage of the Turkic-speaking peoples, and also shared plans for the future. Gunay Afandiyeva noted the importance of mutual cooperation with Kyrgyzstan, one of the founding countries of the International Turkic Culture and Heritage Foundation, and joint work to promote the material and spiritual values of the Turkic world in the international arena.

Charge d'Affaires of the Kyrgyz Republic in Azerbaijan Mukhamed Lou, highly appreciated the activities of the Foundation aimed at preserving and studying the ancient history and culture of the Turkic-speaking peoples, as well as consolidating their solidarity. He also emphasized the importance of strengthening partnership between the Foundation and Kyrgyzstan, noting that he will support the projects carried out by the organization.

The meeting concluded with an exchange of views on the prospects for further cooperation between the sides.