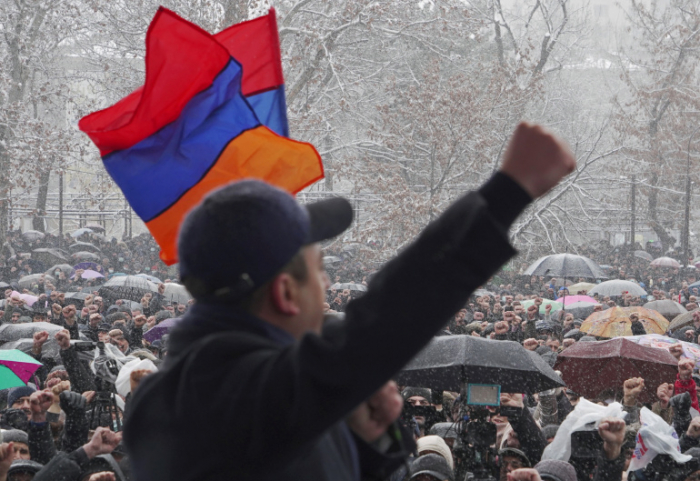 Nikol Pashinyan is under mounting pressure to quit over his handling of the Nagorno-Karabakh war, but his supporters have come out in force.

Armenian Prime Minister Nikol Pashinyan accused top military officers of attempting a coup after they demanded that he step down, adding fuel to months-long protests calling for his resignation.

Anti-government sentiment swelled last November, after the conflict with Azerbaijan over the Nagorno-Karabakh region ended, and gathered pace again this week. The conflict saw thousands killed on both sides and swathes of territory in and around the mountainous region ceded to Azerbaijan.

With pressure on Pashinyan mounting as protesters decry his handling of that war, the military on Thursday issued a statement calling for his resignation.

Pashinyan responded by firing Onik Gasparyan, the head of the army’s General Staff.

He then took to the streets of the capital, Yerevan, in a bid to rally supporters behind him – a move that worked, with thousands coming out to back him.

But throngs of opposition demonstrators also came out to protest in the city, chanting “Nikol, you traitor!” and “Nikol, resign!” while blocking streets and paralysing traffic around the capital.

Armenia’s defense ministry issues a statement saying that the army is not a political structure and that any attempts to involve it in politics are inadmissible.

“The army is not a political institution and attempts to involve it in political processes are unacceptable,” the ministry said. “Each such attempt is a threat to the stability and security of the Armenian Republic.”

Richard Giragosian, director of the Yerevan-based Regional Studies Center think-tank, says there is “an unprecedented new danger and risk of a potential military coup” in Armenia.

“And what we see is the prime minister [Pashinyan] may overreact; he’s calling supporters to gather in the streets with the real risk of deadly confrontation.”