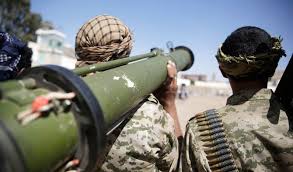 Five Saudi civilians were injured Tuesday when a projectile fired by Houthi rebels in Yemen struck the southern Saudi region of Jazan.

Mohammed Al-Ghamdi, spokesman for the Civil Defense in Jazan, said the projectile hit a border village in Jazan, according to the official SPA News Agency.

“The military projectile had fallen on a public street, resulting in five civilians -- three Saudis and two Yemeni -- being injured," Al-Ghamdi said.

There was no comment from the Houthi group, but the rebel movement regularly announces rocket and drone attacks on Saudi territories, saying they are a reaction to the Saudi-led coalition’s assault on Yemen.

Yemen has been wracked by violence and instability since 2014, when Houthi rebels captured much of the country, including the capital Sanaa.

A Saudi-led coalition aimed at reinstating the Yemeni government has worsened the situation, causing one of the world’s worst man-made humanitarian crisis with nearly 80% or about 30 million of its people needing humanitarian assistance and protection and more than 13 million in danger of starving to death.