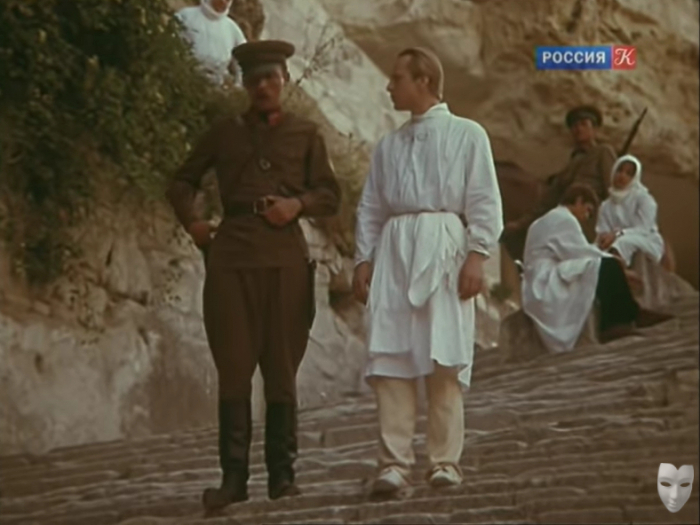 "We have accurate information about saboteurs operating here. They dig graves, remove the bodies of those who died of the plague, cut off their hearts and livers, divide the body into parts and spread the disease..."

These words are from the famous Soviet film "Open Book" (1977). The sixth part of the film, which is about the life of a young microbiologist fighting infectious diseases is about Armenians living in Karabakh.

One day, an ‘NKVD’ officer came to the infectious disease doctors working there and demanded to open the grave. Doctors object: While the plague-carrying microbe can be easily multiplied in the laboratory, why should saboteurs follow such a difficult path as removing the organs of the dead bodies? But they obey the order and are horrified: It turns out that the heads, hearts and livers of the Armenian corpses in some of the graves were cut off and taken away ...

(We present the parts of the film about Karabakh)

During the Soviet era, most of us did not pay much attention to this episode. However, now in the face of the recent events, it is necessary to take a different approach: why did Armenians open graves and cut off the organs of dead bodies? And can it be related to the exhumation of the dead in Kalbajar and the destruction of graves in Aghdam?

In fact, from the beginning, we were aware of Armenian vandalism along with our historical monuments. In other words, our vandal neighbours did not only destroy gravestones in cemeteries, but also dug graves and removed bones. Why? Isn't it a continuation of ancient ritual?

Generally, it is a fact that from time to time Armenians are distinguished by their abominable deeds regarding the dead bodies, graves and funerals. For example, during the First Karabakh War in the 1990s, Armenian servicemen performed rituals on the graves of their dead comrades which were remembered with special atrocities.

Earlier, we simply explained that Armenians were digging up graves like hyenas in the occupied territories of Azerbaijan in search of gold teeth... But over time, it has become clear that their grave desecration stems from more serious reasons. This kind of practices stems from another savage unique custom and desire hidden in the genetic drift of these people, which is unfamiliar to the Caucasus. The name of this desire is cannibalism. Yes, Armenian cannibalism!

It is no coincidence that in the 21st century, Armenians were known as community digging the graves. It shows that Armenians follow the practices of their ancestors. It is not a disease. Armenian cannibalism is a practice born not only of psychological problems, but also of different desires.

For example, if we look at history, we can see a few facts. There are articles on this topic even in Armenian sources: 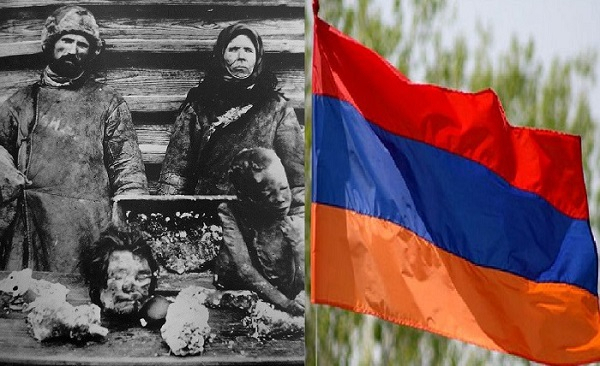 When we look at other sources, we can other terrible facts. The famous Soviet biologist Lev Zilber's memoirs about the fight against plague in Karabakh in the 1930s are noteworthy in this regard:

"The People's Commissariat of Health of Azerbaijan urgently calls Lev Zilberi. At 04:00, the professor left for Karabakh with the necessary equipment and staff. The aim was to prevent the plague. Local representatives of the people's internal Affairs commissariat in Karabakh said that saboteurs were thrown into the region by a foreign country - open graves, cut off the hearts and livers of corpses and spread the infection. But Zilber called this version nonsense. "In a few days, a laboratory can prepare a plague virus and kill thousands of people. Why do saboteurs cut off the bodies of dead bodies? After all, they can be infected, "he said.

“As I read the memoirs of the veterans of the AP system, I did not cease to be amazed. Every day these people were working with some infection or another in the laboratory. A significant portion of their life was dedicated to catching plague-carrying fleas, mice, and marmots. For months at a time, they would work in areas affected by epidemics under horrible conditions. In Gadrut (Karabakh), for example, they had to guard the local cemetery and confiscate the plague-victims’ bodies from the locals. Thinking that it would make them immune to the disease, the natives tried to eat the internal organs of the plague victims," Zilber writes.

Local representatives took Zilberi to the Armenian cemetery. He opened about 10 new graves by the light of torches.

The scientist was horrified. Indeed, some bodies had no heads, and some had no spleen, liver, or heart.

"The third grave we opened belonged to a woman. When we took off their clothes, we saw that the woman's body was dissected and her heart and liver were removed, " Zilber wrote.

Zilber declared general quarantine but he didn't believe in the sabotage news. He found out that there was a plague in the area, and now the disease has revived.

A local teacher who was able to speak a little Russian revealed the secret to Zilber. He said: “There is a belief among the Armenian population living in Karabakh. If there are a series of deaths in the family, they believe that the first dead person is alive. If he/she is alive in the grave, then he/she will "come to take" other relatives. A strange method is used to determine whether the dead are alive. They take the horse to the grave and give him oats. If the horse doesn't eat oats on the grave, then the dead person is alive, and the grave must be dug up and the head or the heart and other organs must be removed. The removed organs are cut and given to other members of the family, they eat them and thus escape from death.”

After learning this secret, Zilber discovered that the infection that once existed in the region is spread in this way. It was possible to prevent the spread of infection.

This incident in Hadrut is a major example of Armenian cannibalism in the 20th century.

A 1977 film by Lenfilm about Hadrut's plague spoke about Armenian cannibalism. It is even noteworthy that the tribe, which is a carrier of the disease, speaks Armenian in some scenes of the film. In general, there are certain versions of the history of Armenians' infection with cannibalism. According to the main version, they used to live among the tribes that once existed in India and still eat human flesh. Later, moving to the west, they brought the traditions of cannibalism to Karabakh.

Italian author Umberto Eco wrote in his novel "The Name of the Rose" that in the Middle Ages, Cannibalism in the Armenian Church was at the level of 'yeres' (wrong belief).

Who knows, maybe if we search in the closed Vatican archives we will find dozens of facts about Armenian cannibalism. Indeed, the Armenian cannibalism and savage customs hidden in the dark pages of history still remain in their brains today, and these customs and habits manifest themselves in various forms today.

Note, based on science, we see that cannibalism occurs not only among humans but also animals. In animals, this behaviour is mainly due to the instinct to find food in malnourished areas. However, sometimes people with psychological problems can behave in a cannibalistic way, even under normal circumstances.

The fact that Armenians have a special history and activities on cannibalism, love for graves and corpses, and atrocities committed by Armenians show that they still suffer from the psychological problems of cannibalism.

By the way, let's remember that Armenians also manifested these cannibal tendencies in the Khojaly Genocide against Azerbaijanis in various forms. Psychologists have proven that most cannibals, who are mentally ill suffering from cannibalism, kill their victims with special cruelty. Although there is no exact scientific explanation of it, it is a proven fact that those, who eat human corpses tend to kill others with special cruelty. Sometimes even a wild animal does not kill its prey if it has a baby in its womb. These people were the Cannibal Armenians, who cut a pregnant woman's womb and killed the baby in front of her. They also strangled another baby to death by nailing to the wall and putting his mother's sheared breast in his mouth. They enjoyed doing all these brutalities, as their ancestors did. They even do not hesitate to include all these in their ‘heroic’ writers’ books.

The Armenian writer-poet Zori Balayan says in his book "Revival of our soul":

He also notes: “I fulfilled my duty as an Armenian. I am sure that every Armenian would be proud of our actions. "

Azerbaijani civilian, Mehriban, who was taken hostage in Khojaly talks about her terrifying memories of Armenian cannibalism:

"They cut off the heads, arms of the dead people and took their eyes out of the bodies. They cooked the sheared heads and fed the prisoners, held in Askaran, with their meat, and they enjoyed it… Serzh Sargsyan, who skinned a 13-year-old girl, also said that he enjoyed skinning."

Let me tell you about another example. Speaking about the horrors of being a prisoner, Mikayil from Kalbajar said: "The bloodthirsty people cut the meat of a beheaded young boy into pieces and threaded on a stick for cooking like a kebab. They forced each prisoner to eat that meat with a gun on their head." ("Escape from the death camp")

After all these, Armenians started digging the graves in Kalbajar and carrying the bodies of their relatives. It is not only because they know they will not return to these areas, but also because of their historical Cannibal traditions, subconscious desires in their genetic codes.

As we mentioned, Armenian cannibalism has been proven in their historical sources. Besides, the tendency of eating human flesh of this abnormal nation has been listed in other sources. These unique cannibalistic tendencies, which cannot be found among other Caucasian nations still exist in their wierd activities.