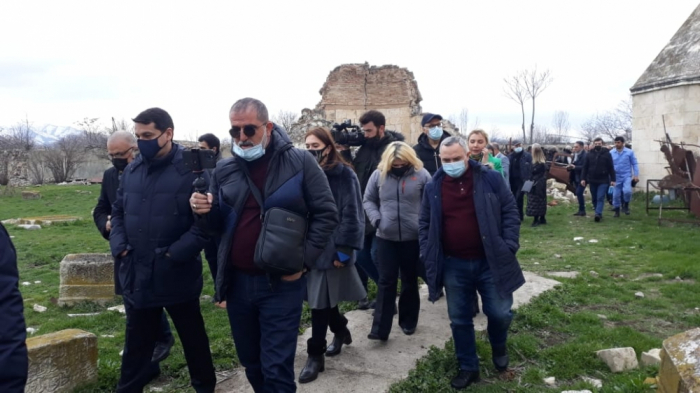 Heads of a number of local media outlets and NGOs, as well as bloggers and public activists have visited liberated from Armenian occupation the city of Aghdam to witness severe consequences of Armenian war crimes committed there, AzVision.az reports citing AzerTag.

The participants familiarized themselves with monuments complex of Karabakh khans, the Imarat cemetery and the Imarat stadium of Qarabag football club in Aghdam. They eye witnessed the atrocities and vandalism committed by Armenians in Aghdam city for 27 years.

They were informed that Armenians savagely destroyed residential settlements, cemeteries, historical and cultural monuments in Aghdam. The mosques and cemeteries, as well as palace of Panahali Khan were also destroyed and insulted by Armenians. The palace was used by Armenians as a stable to keep cows and pigs there.

It was noted that the destruction and desecration of mosques, historical and architectural monuments are clear examples of Armenian vandalism, and these facts should be strongly condemned by the international community as a barbaric treatment of the cultural heritage of not only Azerbaijan but the world as a whole.