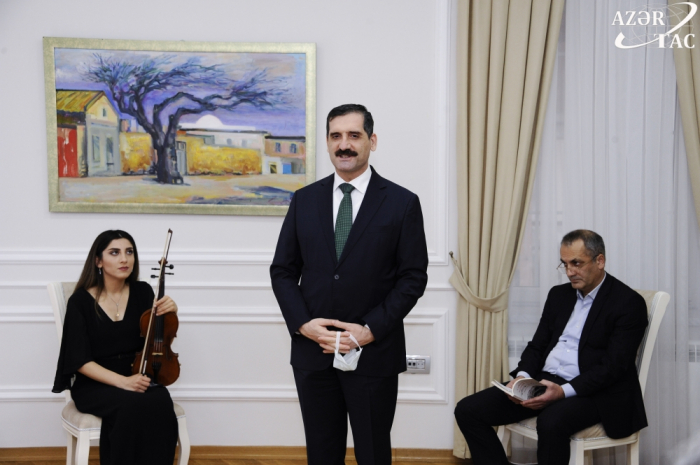 “No matter how close the Azerbaijani and Turkish peoples are in origin, history and mentality, they should learn as much as possible about their roots and spiritual ties. In this knowledge, the main role belongs to literature. Despite the fact that the works of Magsud Ibrahimbeyov are written in Russian, they are deeply national and in this sense play important role. Therefore, today I consider the presentation of his books an important and significant event,” said People's Writer Elchin as the International Turkic Culture and Heritage Foundation hosted the presentation of People's Writer Magsud Ibrahimbeyov`s books titled “A cool breeze in the flames of hell”, published in Turkey, and “No Appeal”, released in Azerbaijani, Russian and English.

He also emphasized the need to further expand the literary ties between the two fraternal peoples.

Opening the event and welcoming the guests attending the presentation, including the ambassadors of the member and observer countries of the organization, President of the International Turkic Culture and Heritage Foundation Gunay Afandiyeva spoke about the creativity, literary and screen works of a prominent representative of the famous "generation of the 60s" Magsud Ibrahimbeyov, and also noted that the new published books of the writer will make an even greater contribution to familiarization with his heritage both in Turkey and in the entire Turkic world as a whole.

“In the book “A cool breeze in the flames of hell”, Magsud Ibrahimbeyov created the image of a right person who, despite this hell, regardless of time and space, does not lose human qualities and remains true to his principles,” said Gunay Afandiyeva.

Turkish Ambassador to Azerbaijan Erkan Ozoral stressed that the Soviet period caused certain delays in relations between the two fraternal peoples. “The publication of this work of Magsud Ibrahimbeyov in Turkey is very important from the point of view of studying Soviet reality. Familiarization with such works is also necessary from the point of view of studying the realities of the period and time when we were separated.”

Chairman of the Union of Artists of Azerbaijan, Azerbaijani People's Artist Farhad Khalilov spoke about the creative merits and originality of the skill of his friend - writer, shared memories about him.

Editor-in-chief of the "World Literature” magazine, poet Salim Babullaoglu emphasized the importance of reading the author's book published in Turkey to imagine the "era of godlessness". “To understand this period, it is necessary to read Elchin's "Death Sentence" and Magsud Ibrahimbeyov's "A cool breeze in the flames of hell". It is these works that vividly convey to the reader the difficulties of the Soviet era.”

Anna Ibrahimbeyova, director of the Magsud Ibrahimbeyov Creative Center, highly appreciated the presentation of the writer's books at the Foundation and expressed confidence that the published books will bring the author a new readership.

At the presentation ceremony, artistic compositions from Magsud Ibrahimbeyovʹs book “A cool breeze in the flames of hell” under the guidance of People's Artist of Azerbaijan, director Vagif Asadov, performed by Honored Artist of Azerbaijan Elshan Rustamov and Honored Artist Oleg Amirbekov, with musical accompaniment by Gamarkhanim Mammadova on violin and Ismail Zulfugarli on tar.