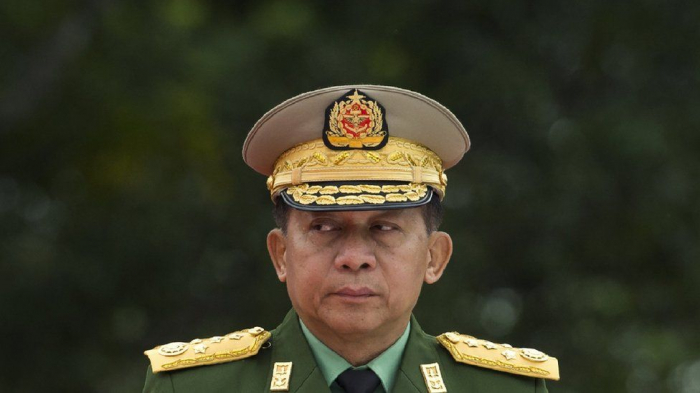 Myanmar's security forces have cracked down on new protests as the leaders of its coup marked Armed Forces Day.

Protesters took to the streets of Yangon and other cities, with reports that 16 had been shot dead.

Coup leader Min Aung Hlaing said in a national TV address on Saturday he would "safeguard democracy", promising elections but giving no timetable.

More than 320 people have been killed in the suppression of protests since the coup on 1 February.

State TV warned in a separate broadcast on Friday that people "should learn from the tragedy of earlier ugly deaths that you can be in danger of getting shot to the head and back".

What did the coup leader say?

"The army seeks to join hands with the entire nation to safeguard democracy," Min Aung Hlaing said in his live broadcast on Saturday.

"Violent acts that affect stability and security in order to make demands are inappropriate."

He added that the army had to seize power because of "unlawful acts" by democratically-elected leader Aung San Suu Kyi and her party, the National League for Democracy.

However, he did not specifically say that the military had been given shoot-to-kill orders. The junta has previously tried to claim that shootings have come from among the protesters.

The parade is usually attended by officials from other nations. However, it appeared that Russian deputy defence minister Alexander Formin was the only foreign official there.

The US, UK and EU have all imposed sanctions in response to the military coup. Myanmar and Russia's defence ties have grown in recent years. In that time Moscow has provided training to thousands of soldiers, and has sold arms to the military.

What is happening on the streets?

Anti-coup activists had called for major demonstrations on Saturday, despite the military's threat to use deadly force against them.

Police were out in strength, trying to prevent rallies, particularly in Yangon.

At least 16 people were killed by security forces, local media reports said, four of them outside a police station in the Dala suburb of Yangon.

Protesters were also on the streets of the second-largest city Mandalay, carrying the flag of Ms Suu Kyi's party and adopting the now traditional anti-authoritarian three-finger salute.

One journalist told Agence France-Presse police had used live ammunition against protesters in the north-eastern city of Lashio.

Dr Sasa, a spokesman anti-junta group CRPH, told Reuters: "Today is a day of shame for the armed forces, The military generals are celebrating Armed Forces Day after they just killed more than 300 innocent civilians."