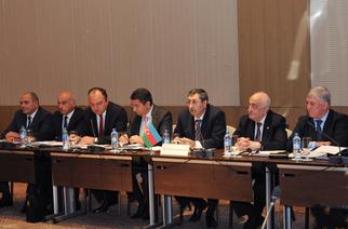 Regular (33rd) meeting of the Special Working Group of the Caspian littoral countries to define the legal status of the sea started in Azerbaijan`s capital.
Deputy foreign ministers of Azerbaijan, Kazakhstan, Russia, Turkmenistan and Iran attend the meeting.

All issues related to the legal status of the Caspian Sea may find their solution in an atmosphere of friendship and cooperation among the littoral states, Azerbaijan`s Deputy Foreign Minister Khalaf Khalafov said at the meeting.
Khalafov urged the littoral states to continue the ratification of the agreement on cooperation in security, which was adopted at the Baku summit in 2010, AzerTAc reports.

According to Khalafov, there are still a number of open questions in determining the status of the sea, in particular, the division of the sea, as well as environmental issues.

The 33rd meeting of the Special Working Group on the Caspian legal status is taking place in the Azerbaijani capital on September 11-12 at the level of deputy foreign ministers. The meeting will continue discussions over the draft convention on the legal status of the resource-rich basin.

Earlier Khalaf Khalafov said that the next summit of the Caspian countries will be held in Russia, while the date of the event is yet to be scheduled.