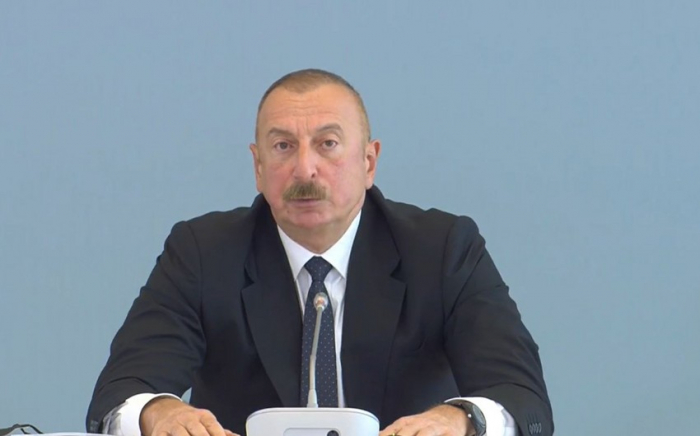 If we return to the Zangazur corridor, why not come back to Yerevan, Azerbaijani President Ilham Aliyev said during his speech at the ‘A New Look at the South Caucasus: Post-Conflict Development and Cooperation’ conference at ADA University in Baku on April 13, 2021, AzVision.az reports.

"Those who intend to erase the history of Azerbaijan have been taught that they are allegedly heroes, but in fact, they are criminals. There are examples of Shaumyan and others who killed Azerbaijanis and committed genocide. We want the younger generation to know that Zangazur is a historical territory of Azerbaijan", Ilham Aliyev noted.

“Zangazur was given to Armenia 101 years ago in 1920. Before that, this area belonged to us. When I say Goycha, they call it Sevan Lake. This is a fact. It is enough to look at a map of the early 20th century. However, you will not see Sevan while looking there. You will see Goycha there. The same is true with regard to Yerevan. They have destroyed the historical part of Yerevan. It is a clear fact that Azerbaijanis, including my ancestors, lived there”, stressed the president.

The head of state noted that this is a fact. However, this does not mean that we have territorial claims. "Yes, we will return there. I have not said that we would return there with tanks. I said we will return. Why not? If we return to the Zangazur corridor, why not come back to Yerevan. The time will come, we will do it. I share my position,” he stressed.