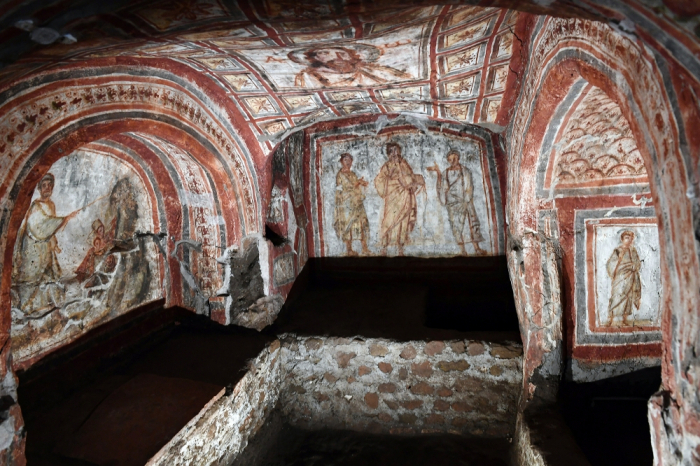 On April 18, which is annually celebrated as the International Day for Monuments and Sites, the world community is focused on the protection of monuments, historical sites and cultural heritage, as well as on the solution of certain problems various countries are faced with.

Azerbaijan, rich in historical monuments, has always been sensitive to this issue, paying special attention to the world's cultural heritage. From this point of view, the projects implemented by the Heydar Aliyev Foundation in the different parts of the world and its contributions to the protection of universal human values are praiseworthy.

Azerbaijan’s years-long projects aimed at preserving the historical, cultural and religious heritage and passing it on to future generations are beyond the country’s borders. To date, the Heydar Aliyev Foundation has carried out the restoration of a number of Europe’s historical sites at risk of collapse. The Foundation, which greatly contributes to Azerbaijan’s good image on a global scale, does not only restores historical sites and monuments but also carries out the construction of cultural facilities.

Over the past period, the Heydar Aliyev Foundation has done important work towards preserving cultural heritage in Azerbaijan and abroad. In 2006, the Foundation initiated the reconstruction of the tombstones of Azerbaijan’s prominent historical figures – Mirza Shafi Vazeh, Mirza Fatali Akhundov, Hasan bey Aghayev and Fatali Khan Khoyski in Tbilisi, Georgia, as well as the creation of an alley there. Moreover, the Foundation restored universal monuments in the park outside the Palace of Versailles in 2007, Musée du Louvre in 2008 and the Berlin City Palace, which was burned down and destroyed during the Second World War. The Foundation’s cultural projects in foreign countries also include the erection of a monument to great Azerbaijani poem Nizami Ganjavi in Villa Borghese Gardens, Rome in 2012, the restoration of the Roman Catacombs inside the Vatican, the installation of a bust to prominent Azerbaijani writer, philosopher and humanist Mirza Fatali Akhundov in the All-Russian State Library of Foreign Literature named after I. Rudomino, the establishment of an Azerbaijan Cultural Center in Paris, the repair of the Philosophers' Room in the Rome Capitoline Museum, etc. There are dozens of such examples.

Azerbaijan’s contributions to the Vatican

The projects initiated by Azerbaijan in the Vatican draw the world’s attention. With the support of the Heydar Aliyev Foundation, some religious monuments of historical significance in the Vatican have been restored for over ten years. Earlier this year, the Foundation and Vatican's Pontifical Commission of Sacred Archaeology have signed a cooperation agreement to restore the Catacombs of Commodilla. This agreement commenced the next stage of cooperation between the Heydar Aliyev Foundation, which keeps promoting Azerbaijan’s cultural heritage on a global scale, and the Vatican.

Given the projects implemented within bilateral cooperation, three important stages can be distinguished.

At the first stage, the catacombs of St. Marcellino and Pietro were restored. President of the Heydar Aliyev Foundation Mehriban Aliyeva inaugurated the catacombs after the restoration. Now the public can visit those catacombs, where magnificent frescoes have been restored.

The second stage of cooperation started with the establishment of a museum in the Basilica of St. Sebastian with the support of Mehriban Aliyeva.

The ongoing third stage aims to restore the Catacombs of Commodilla. All the mentioned sites are considered to be an important cultural heritage for the Christian world.

As for the protection of Azerbaijan’s historical and cultural heritage, the Heydar Aliyev Foundation has done considerable work to this end, restoring or reconstructing sites of different religions in the country. The number of restored historical monuments is quite large.

Currently, the Mausoleum of Molla Panah Vagif in the city of Shusha is being reconstructed with the support of the Heydar Aliyev Foundation and under the supervision of Azerbaijan’s First Vice President Mehriban Aliyeva.

Unlike Armenia, Azerbaijan continues to greatly contribute to the world’s cultural heritage through the Heydar Aliyev Foundation. Unfortunately, Armenia, which had pursued a policy of aggression to the date, continues to take a completely different approach. Armenia almost completely destroyed the cultural heritage of the Azerbaijani people during the 30-year long occupation of Azerbaijani territories. Armenia has proven itself to be a vandal state that demolished hundreds of religious, cultural and historical monuments.

The international media is no longer indifferent to the barbaric actions of Armenians, highlighting the Armenian aggression against the incomparable cultural heritage in the liberated Azerbaijani lands. Foreign journalists often visit the liberated Azerbaijani lands to witness the consequences of Armenian vandalism against Azerbaijan’s historical and cultural monuments, as well as the destruction of museums, art galleries, mosques and cemeteries.

At present, Azerbaijan has set itself a great task – the restoration of its liberated lands. Although some monuments are planned to be restored, it is impossible to return hundreds of historical monuments that were erased by the Armenians. It should be noted that as a result of the Armenian vandalism, only a single safe building remained in Aghdam, known as “Hiroshima of the Caucasus”. That is a mosque, which was used for military purposes by Armenia.

Moreover, the Armenians used the Azikh and Taghlar caves, one of the first human settlements, and Garakopak and Uzerliktepe burial mounds for military purposes and deliberately destroyed them. Burial mounds in Khojaly, Aghdara, Fuzuli and Jabrayil districts, ancient cemeteries, tombs, tombstones, mosques and temples, as well as monuments and other buildings dating back to Caucasian Albania in Shusha, Lachin, Kalbajar, Gubadli, Zangilan and Fuzuli were demolished by Armenian barbarians.

The city of Shusha, called the cultural capital of the Caucasus, was also subjected to Armenian vandalism. During the occupation, most of the historical monuments in Shusha were razed to the ground. Ashaghi Govharagha, Yukhari Govharagha, Kocharli, Mardinli, Juma mosques, house museums of genius Azerbaijani composer Uzeyir Hajibeyov and the founder of professional vocal art Bulbul,  the Palace Complex of Khurshud Banu Natavan, the mansions of Firudin bey Kocharli and Zohrabbeyovs, and the Mausoleum of great Azerbaijani poet, vizier of the Garabagh Khan, Molla Panah Vagif were vandalized by Armenians. Also, other Azerbaijani properties were desecrated and used for various purposes.

Armenian vandals didn’t only destroy hundreds of buildings, palaces, mosques, shrines and temples, but also stole stone statues, ancient tombs, mounds and historical exhibits but took them to Yerevan. They destroyed what they could, and took those items that could be transported to Armenia. In Shusha, 8 museums and 31 libraries have been destroyed. Also, the vandals looted about 5000 exhibits of the city's Historical Museum, The Azerbaijan Carpet Museum and the Museum of Folk and Applied Arts of the Shusha branch, about 1000 exhibits of the Karabakh State Historical Museum, more than 300 items of the composer Uzeyir Hajibeyov, the founder of professional musical art of Azerbaijan, about 400 items of the singer Bulbul, more than 100 items of the musician and artist Mir Movsum Navvab. According to the official data, 22 museums and museum branches with more than 100,000 cultural artifacts were destroyed in the liberated territories.

The presented facts clearly show the extent of the damage inflicted on not only Azerbaijan but on the world's cultural heritage. Unfortunately, many countries and the world community celebrating the International Day for Monuments and Historic Sites still don’t appreciate the Armenian vandalism, and for some reason, they neglect the crimes committed by Yerevan and the genocide against our national and cultural heritage.