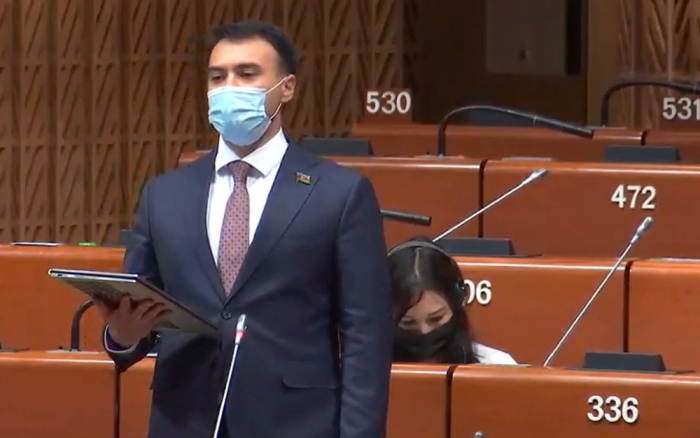 Member of the Azerbaijani delegation to the Parliamentary Assembly of the Council of Europe (PACE), MP Kamal Jafarov protested against the Armenian MP Naira Zohrabyan who actively supports terrorism in his speech at the debates held in PACE.

"I want to show a picture of the members of the Assembly. MP Naira Zohrabyan, is this you? Did you post on Facebook that you hit the Mingachevir reservoir? This is terrorism. I ask Stefan Schennach [co-rapporteur of the Parliamentary Assembly of the Council of Europe (PACE) for the monitoring of Azerbaijan] to explain this. If this is true, do we support terrorism in PACE?", MP Kamal Jafarov asked.

MP Kamal Jafarov also expressed his concern over the debate topics selected by the Assembly adding that Azerbaijani is ready to defend its position at any time and in any format.

"PACE turned a blind eye to the violation of rights of more than 1 million refugees and IDPs following the end of the First Karabakh War and the tragedies committed against Azerbaijanis during the Khojaly genocide. Now instead of discussing about the demining of the liberated areas, we are talking about the criminals arrested in our territories", Azerbaijani MP noted.

Jafarov also stated that 20 Azerbaijani civilians lost their lives after signing the peace statements because of the mining of almost all the previously occupied Azerbaijani territories by Armenia. "This is a war crime. Armenia refuses to provide the maps of mined areas in liberated lands", he added.

Note, after the liberation of Shusha city by the Azerbaijani Army, the Armenian MP gave an ultimatum to the country’s leadership to launch a missile strike on the Mingachevir reservoir. It was not enough for her that the Armenian military had already distinguished itself during the war with new "feats", by killing the civilian population of Azerbaijan – night rocket bombings of Ganja, deadly strikes on Barda, Tartar and other cities of Azerbaijan.