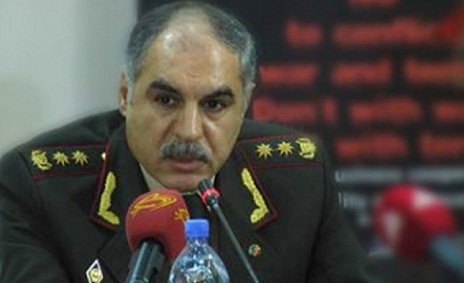 The investigation of 25 criminal cases against 43 people who have committed acts of corruption in Armed Forces of Azerbaijan has been completed and submitted to the military courts for consideration.
Military Prosecutor of Azerbaijan, Lieutenant-General of Justice Khanlar Valiyev made the remarks on Friday during the board meeting held at the Republican Military Prosecutor`s Office on the outcomes of the first half of 2015 and tasks ahead.

It was noted that in the first half of 2015, military prosecuting agencies identified a number of gravest and complex crimes, and the investigation of some was completed.

During the reporting period a number of cases involving the embezzlement of state property on a large scale have been investigated and perpetrators brought to justice. During the investigation the payment of 82.3 percent of the material damage caused to individuals and legal entities as a result of the crimes committed were provided.

1064 offences were detected in the activities of the investigation agencies as a result of 63 inspections carried out in the first half of this year. 98 submissions were made to eliminate the causes and conditions of offences, 125 persons were warned, 30 criminal proceedings were launched, and 76 written instructions were submitted on the proceedings conducted by investigation agencies. As a result of consideration of the submissions made by the prosecutor, 203 persons were brought to disciplinary responsibility.

78 trials were held to increase the role of court decisions and judgments for prevention of crimes, and avoid further crimes.