What is the truth about 'workplace PTSD'? - iWONDER 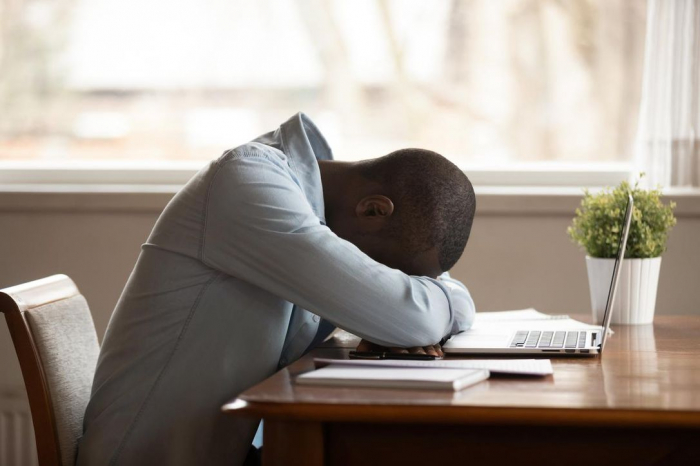 Although some joke about being 'scarred' by past bad jobs, workplace-induced emotional trauma is real – with long-lasting effects.

When Emily started her first job in the legal industry, she was cautiously optimistic. After her graduation, the then-22-year-old was looking forward to joining the labour market. One of the managers at the office was also a woman of colour – a hopeful sign for the company’s culture – and she was excited about her salary, which felt substantial for a first-time worker.

However, she also saw some red flags: for one, an office culture built around drinking – so much so, she says, that she was asked to take shots with higher-ups after her final interview. “I'm a highly susceptible 22-year-old, just getting out of college, who wants to win the approval of the cis white [staffers]. I drank a lot more than I should have,” recalls Emily, whose name has been changed due to the sensitivity of her claims.

She says she experienced constant pressure to overwork, racial harassment and was pushed to engage with graphically violent and racist content. She experienced exhaustion to the point that she begged for a medical leave at the end of her first year. After threatening to quit, she was approved for time off; at the end, she realised she couldn’t go back. Ultimately, she quit – a decision she feels saved her life.

“I thought about jumping off the [building’s] balcony at one point,” says Emily. “It was like, no one ever comes up here except for the marketing team. If I go up here and just jump, it'll be fine. It's 32 stories, it'll definitely kill me.”

Emily held her position for only a year, and never formally reported her experiences. But now, almost three years after leaving, the job haunts her. She ties many of her current struggles with mental illness to her past workplace – still panicking after hearing an email notification at the weekend, for instance.

While society has long associated workplace trauma-induced mental illness with certain occupations like firefighting and the military, the notion of trauma developed from a toxic job or workplace is becoming increasingly recognised throughout the workforce.

In March, a viral Twitter thread exposed its prevalence. Well after leaving a job, people shared that anything from retracing their old commute to otherwise-banal office socialising might induce chest pains, muscle spasms and more.

Even without a clinical designation, workplace-induced trauma is a tangible issue – one that’s especially gaining attention as younger generations grow more vocal about their mental-health struggles. What do workers do when they can’t shake the ripple effects of a toxic workplace – and how can they heal?

Workplace-induced trauma can stem from several causes: racism, bullying, poor work-life boundaries and job insecurity. It’s not a new concept, but research over the past two decades has highlighted its rising prominence – and some workers have come to refer to it as ‘workplace PTSD’.

Dr Chi-Chi Obuaya, a London-based psychiatrist and mental health professional, is hesitant to associate these forms of workplace-induced trauma with the clinical definition of PTSD. However, he confirms that this damage is real, though he notes workers may conflate trauma with developing PTSD, and may possibly be experiencing other anxiety or depression disorders instead.

Still, no matter how people refer to their struggles, workers have reported long-term impact on their careers, such as changing how they make career decisions, perceive safety in the workplace, interact with superiors and more.

“There's a perceived need to almost take the presenteeism that was a problem with face-to-face working, now online. You've got to constantly be available on Zoom, and people can see what you're doing,” says Obuaya. “People feel under pressure with their work.” He adds that these experiences are especially difficult – and can precipitate mental disorders – in workplaces in which bullying was already an issue.

Michelle K Duffy, Vernon Heath Chair of Work and Organizations in the Carlson School of Management at the University of Minnesota, US, adds that the pandemic-linked changes to work have complicated our cultural assumptions about what to expect, and what we’re entitled to, in the workplace. As such, we may not know what constitutes acceptable workplace behaviour or demands in this ‘new normal’ – or how to access help if something feels wrong. And this ambiguity can quickly breed toxicity.

Toxic work environments can cause long-lasting emotional damage in part, Duffy suspects, because of how blurred the boundaries between work and life can be. “In the past, if we talked about trauma from an abusive supervisor or toxic colleagues, people considered it a ‘personal problem’,” says Duffy. But it’s hard separating your “personal problem” from work when it’s a place where you may spend 40 or more hours of your week.

And because the workplace has come to play a significant role in our psyches, Duffy says that “when the safety of the workplace is violated for people, it's really hard”. If the workplace doesn’t recognise the problem and provide support, it can be more challenging for the traumatised person to process – and they may end up blaming themselves. “Without that structural change for you, without the workplace recognising [the harm], it's hard to move through that [violation]. People are really hard on themselves.”

Those who have experienced trauma in the past – whether linked to gender, racism or other bigotry – can particularly struggle in toxic work environments. “If you have a hostile workplace, or a supervisor who's aggressive or some dynamics with colleagues that feel intimidating or toxic, that can trigger prior memories for people who have had trauma,” says Dr Shaili Jain, a physician and trauma researcher at Stanford University. “Real symptoms can start manifesting in reaction to the current-day situation.”

No matter the type of issue a worker experiences, the most damaging environments are also generally the hardest places to report problems. One major factor is power imbalances between managers and lower-level workers; in hierarchy-driven workplaces, workers may find it especially challenging to complain to supervisors.

A lack of communication can become even more of a problem when gender, race or age dynamics are in play. Emily, for example, says she constantly felt discomfort trying to create boundaries at her toxic job because her superiors – largely white men – dismissed her attempts to detach from their drinking culture, and suggested she couldn’t “fit in” with the company culture without participating.

These dynamics can combine to make trauma more acute and longer-lasting – a major problem for workers of all stripes, no matter how the ‘severity’ of their individual experiences.

Although workplace-induced trauma may be alarmingly present, there may be some hope on the horizon.

An increasing number of people recognise the damage toxic workplaces can do – and have become more comfortable talking about it, says Duffy. In the past few years, workers have grown more vocal, sharing experiences of sleepless nights, anxiety and panic attacks, all induced by unhealthy work environments.

Jain says we will soon face a reckoning on workplace safety in all its forms, with the countless “traumatised workers” forced into frontline roles by Covid-19 making the reality of workplace trauma unavoidable. Jain also mentions the collapsing of work-life boundaries for remote office workers, and resulting mental-health difficulties, as part of a coming referendum on work trauma.

As a result, Jain is hoping to see workplaces embrace mental-health support for their employees. “Organisations that just gave lip service to these things will have to actually build psychological pathways for the rehabilitation of their workforce if they want to maintain their profitability and their productivity,” she says. “It is a massive call for employers to take action, definitely on a policy and governmental level.”

Jain adds that the burden particularly falls on employers to be more in tune with their workforce, recognising signs like absenteeism and presenteeism as well as low morale and high turnover.

However, there’s no telling when – or if ­– these workplaces will change. This means that, unfortunately, the burden may fall on workers to seek help and induce progress. Workers can try to create better work boundaries and push for culture change both within and outside the workplace. Importantly, experts stress that seeking independent mental-health care is critical to helping overcome trauma.

But the first place to start is taking your experiences seriously – whether or not your workplace does.

Emily, who is still navigating launching her career, continues to feel residual effects of the trauma she experienced in her workplace. “[My past job] changed essentially everything about the way that I think about work, making work relationships, professionalism,” she says. However, in the last few years, she’s found some reprieve through sharing her experiences and receiving mental-health treatment. She’s validated that her experiences were not only real – but they were more common than she thought.