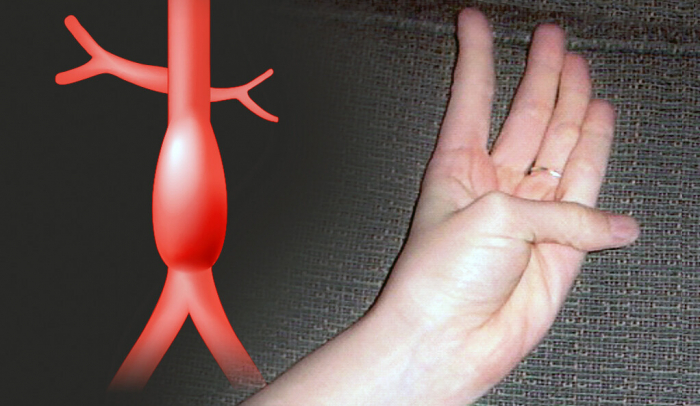 A simple "thumb palm test"  may indicate whether someone has an ascending aortic aneurysm or a potentially fatal ballooning of a large artery in the heart, researchers say, suggesting the test be included in standard physical exams, especially for those with a family history of aortic aneurysm.

Researchers found that positive "thumb palm tests," or the "thumb crossing beyond the edge of the palm" often correlated with the diagnosis of an aortic aneurysm. According to a related release posted by Yale University, "being able to move the thumb in that way is an indication that a patient’s long bones are excessive and their joints are lax — possible signs of connective tissue disease throughout the body, including the aorta."

While 59 patients had ascending aneurysm diagnoses, the test indicated 10 patients had the disorder, while 295 patients did not.

"Our study showed that the majority of aneurysm patients do not manifest a positive thumb-palm sign, but patients who do have a positive test have a high likelihood of harboring an aneurysm," said senior author Dr. John A. Elefteriades, the William W.L. Glenn professor of surgery at Yale and emeritus director of the aortic institute at Yale-New Haven Hospital. "The biggest problem in aneurysm disease is recognizing affected individuals within the general population before the aneurysm ruptures."

"Spreading knowledge of this test may well identify silent aneurysm carriers and save lives," Elefteriades said.

The release notes that Elefteriades and colleagues incorporated the test in lectures for over 20 years, and applied the test to at-risk patients, though it had not undergone clinical studies.