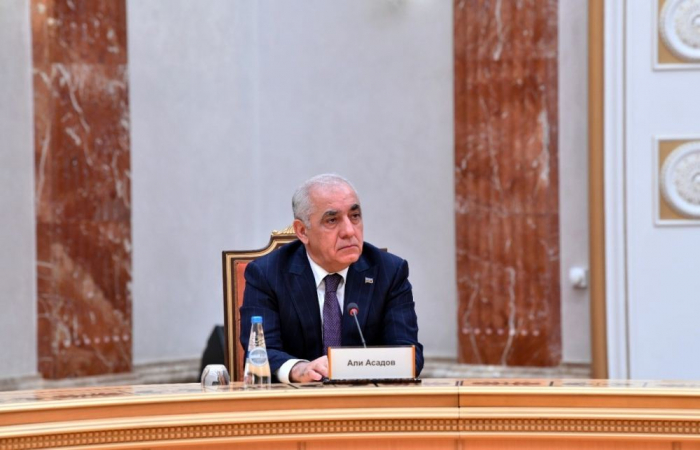 Asadov made the statement during his speech at a meeting of the Council of Heads of Government of the CIS countries in Minsk (Belarus) held on May 28, AzVision.az reports.

First, the prime minister spoke on the agenda of the meeting, noting that strengthening of interaction in the socio-economic and humanitarian spheres will continue to contribute to the comprehensive development of cooperation in the CIS region.

He spoke about urgent measures taken in Azerbaijan to prevent the spread of coronavirus infection and eliminate the negative impact of the pandemic on the economy.

Asadov also drew the attention of the council members to the new geo-economic reality that developed in the South Caucasus after the liberation of the Azerbaijani lands from the Armenian occupation.

Besides, he noted that the unblocking of transport arteries and the creation of an extensive communications network will significantly enhance the transport and economic potential of the South Caucasus, open up great prospects for development not only in the region, but also throughout the CIS.

Speaking after the Azerbaijani government’s head, acting Deputy Prime Minister of Armenia Mher Grigoryan unfoundedly accused Azerbaijan of violating the territorial integrity and sovereignty of Armenia, as well as keeping prisoners of war and capturing 6 Armenian servicemen on May 27.

Addressing the chairman of the Council of Heads of Government of the CIS, the Prime Minister of Azerbaijan responded to the false accusations of the Armenian side.

Asadov reminded that in his speech at a meeting of the Council of CIS Heads of Government in the format of a videoconference held on November 6, 2020, he stated that Azerbaijan had never laid claim to foreign lands.

"Today I want to reaffirm this thesis. We don’t claim an inch of Armenia’s land, but won’t give up an inch of our land to anyone. This is our principled position," the prime minister said.

He emphasized that Azerbaijan doesn’t consider the Armenian soldiersbwho entered its territory with weapons in their hands and killed four people on November 26, 2020, including three civilians, after the cessation of hostilities to be prisoners of war.

Touching upon the incident that took place on May 27, 2021, the prime minister said that a group of servicemen of the Armenian armed forces tried to cross the state border in the direction of Azerbaijan’s Yukhary Ayrim village ( Kalbajar district), as a result of which six Armenian soldiers were disarmed and taken prisoner.

"I have a question for the acting deputy prime minister of Armenia and for you, dear colleagues. What did the Armenian servicemen do on May 27 in Yukhari Ayrim village of Azerbaijan’s Kalbajar district at three o'clock in the morning? Why did they mine our territory?," Asadov addressed members of the council.

He emphasized that the Azerbaijani side has all the data of the area where the incident occurred, including geographic coordinates.

Asadov also drew the attention of the meeting participants to serious inconsistencies in the statements on the incident, made by Armenia’s acting Prime Minister and deputy head of the General Staff, adding that Armenia is trying in every possible way to involve other countries in this situation.

The Azerbaijani prime minister also stressed that after gaining independence, Azerbaijan carried out delimitation and demarcation with neighboring states, including Russia, Iran and Georgia, in accordance with international legal norms.

"Delimitation and demarcation of the border with Armenia was impossible due to the fact that the territory of Azerbaijan was occupied by the Armenian armed forces," he said. "After the end of hostilities (the Second Karabakh War from late Sept.to early Nov.2020), Azerbaijan began to establish its border infrastructure and is ready and will resolve the issue of drawing the border line with Armenia in a constructive manner."

Asadov said that in this regard, Azerbaijan supported the proposal of the Russian side to establish an appropriate trilateral commission on the delimitation and demarcation of the border with Armenia.

He noted that the determination of the border line is a technical process that must have a serious international legal basis.

The prime minister said that Azerbaijan is committed to ensuring sustainable peace and security in the region, including the process of normalizing the post-conflict situation and resolving all differences by diplomatic means in the context of the conscientious implementation of the provisions of the trilateral statements of November 10, 2020 and January 11, 2021 (between Azerbaijani and Russian presidents, and Armenian prime minister to cease the hostilities within the Second Karabakh War and open all the communications in the region, which were closed since the Armenian-Azerbaijani conflict in 1990s).