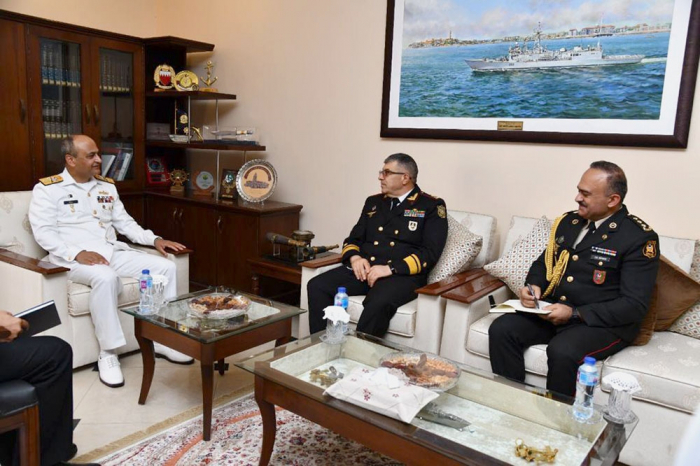 A delegation led by Commander of the Azerbaijan Naval Forces, Rear Admiral Subhan Bakirov held a series of meetings as part of the visit to Pakistan, the Defense Ministry told AzVisiion.az.

First, the Azerbaijani delegation visited the mausoleum of the founder of the Pakistani state, Muhammad Ali Jinnah in Karachi and laid a wreath at his grave.

The delegation then visited the Pakistan Naval Fleet.

During the meeting of Rear Admiral S. Bakirov with the Commander of the Pakistan Naval Fleet Rear Admiral Ovais Ahmed Bilgrami, the parties discussed exchange of experience between the crews of warships, organization of mutual visits of seamen, and other issues within the framework of the cooperation between Naval Forces of Azerbaijan and Pakistan.

The Azerbaijani delegation also met with Rear Admiral Naveed Ashraf, commander of the Karachi flotilla of the Pakistani Navy. The parties discussed the issues of the development of naval infrastructure, the security of seaports, and other aspects.

The Azerbaijani military delegation also visited Shipyard & Engineering Works Limited in Karachi. During the meetings held with the leadership of the enterprise, a detailed briefing was given on its production capacity, operational characteristics of various types of ships and their purposes, combat use, as well as the combat means available in their armament.

Then the parties discussed the development of cooperation in the field of shipbuilding and ship maintenance.