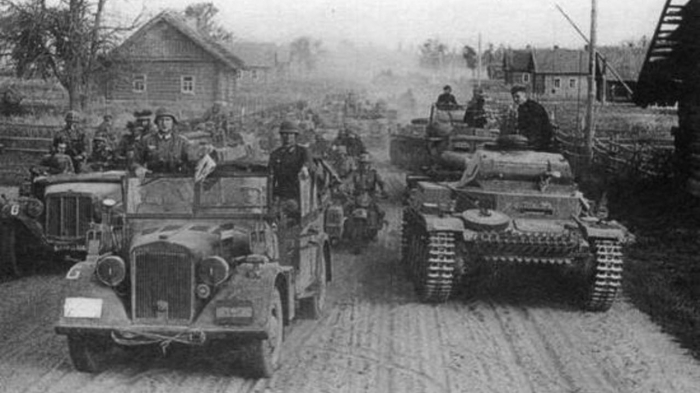 Perhaps the most pivotal moment in the Second World War took place on June 22, 1941 when Nazi Germany launched its invasion of the Soviet Union – shocking the world and striking fear into Joseph Stalin’s heart, but sowing the seeds of Adolf Hitler’s downfall. FRANCE 24 looks back at Operation Barbarossa, 80 years on.

One of the most striking eyewitness testimonies from this extraordinary outburst of militarised violence – in which some five million people were killed in 200 days – comes from German soldier Alexander Cohrs: “Two villages were burning in front of us. Civilians were completely taken by surprise; they didn’t have time to flee. The most horrific images was a three-year-old child lying in the middle of the road with half its head missing.”

Barbarossa shattered the infamous Molotov-Ribbentrop non-aggression pact between Nazi Germany and the USSR signed in August 1939. Stalin was shocked; he had received a plethora of warnings of an imminent invasion – notably from Winston Churchill, informed by British intelligence briefings. The communist dictator had refused to believe them.

“It’s got to be a provocation from the German generals,” he told senior Soviet officials in the early hours of June 22. “I’m sure Hitler isn’t aware of this.” *

Hitler felt the need to act one year to the day after the French Armistice because his previous strategy – to knock the UK out of the war – had failed. After the Royal Air Force defeated the Luftwaffe in the 1940 Battle of Britain and Churchill had made it clear that the UK would remain a thorn in Hitler’s side, the Nazi dictator turned his attention to the USSR.

“Britain remaining in the war after the Fall of France effectively tore up Hitler’s strategy, so he had to devise a new plan – conquering the USSR to achieve his dream of German Lebensraum,” explained Jean Lopez, co-author of Barbarossa : 1941, La Guerre Absolue.

Hitler had already expounded upon this concept of German “living space” carved out in Eastern Europe in Mein Kampf – but his failure to defeat Britain gave it a new impetus. “He wanted to use Lebensraum so he could successfully wage a long war against the UK and the US, because the Third Reich did not have enough resources without seizing those of the USSR,” Lopez put it.

“Soviet expansion into the Baltic States, Romania and Poland, followed by requests in November 1940 for influence in Bulgaria and the Turkish Straits made clear to Hitler that Stalin posed a serious strategic threat, which had to be eliminated,” Overy said.

“The Soviet Union was also the home of Jewish-Bolshevism [a conspiracist canard at the heart of Nazi ideology] so that defeating Soviet forces would also eliminate the threat from communism hanging over Germany and Europe,” Overy continued. Hitler used a “cocktail of motives” at various points to “convince himself of the necessity and justice of war”.

Surprising their enemy played to the Nazis’ advantage as a flabbergasted Stalin floundered. “He spent a few hours hesitating, wondering if it was a real invasion, an attempt to force negotiations, or a mere provocation,” Lopez recounted.

Consequently, Soviet forces suffered colossal losses while the Wehrmacht tore into the USSR. Millions of soldiers were surrounded, stripped of supplies and forced to surrender.

The Stalinist regime also menaced Soviet troops. The fearsome secret police, the NKVD, was ordered to shoot dead any soldier suspected of “cowardice” – while people suspected of lacking patriotism were sent away for forced labour.

Conditions on the frontline were brutal as 10 million men, 30,000 planes and 25,000 tanks clashed in a gigantic fight to the death. “Fanatics would shoot at us until the roofs collapsed over their heads and buried them in rubble,” German soldier Hans Rother remembered the fighting in Ukraine.*

It is a myth that the Wehrmacht was rampantly successful until the famous turning point at Stalingrad from August 1942 to February 1943, Overy said: “The Red Army was poorly prepared at the frontier and it proved very difficult to establish a solid or co-ordinated line of defence. Important tactical and technical differences maximised the impact of the German attack – for example, Soviet aircraft and tanks lacked radio communication; infantry tactics were also inept in 1941 and improved only later.

“German forces, however, soon ran into logistical difficulties, had to spend much time clearing up pockets of resistance from by-passed Red Army soldiers, and suffered from strategic confusion at Hitler’s HQ,” Overy continued. “There was enough of a difference to bring big early victories, but by November/December the hope for victory in a few weeks or months was completely dashed, and the momentum was never recovered.”

“There wasn’t a turning point as such; rather, a continuing process of wear-and-tear ground the Wehrmacht down,” Lopez added.

Masha Bruskina, a nurse and member of the Soviet resistance, is led through the streets of Minsk, Belarus, before she is hung on October 26, 1941. She was made carry a sign bearing the inscription "We are the partisans who shoot German soldiers". © Bundesarchiv, Wikimedia
A new stage in the Holocaust

Barbarossa failed because of fierce resistance from an enemy Nazi ideology had misleadingly cast as inherently weaker – as well as the logistical difficulties of invading Russia’s vast territories, especially in winter (the same problem that had cursed Napoléon Bonaparte’s invasion in 1812). But the Nazis’ cruelty to local populations also undermined Barbarossa.

Some people in occupied territories greeted the Wehrmacht as liberators from Soviet oppression. But this was soon revealed to be an illusion. German forces’ brutality against civilians became part of daily life. Millions of Soviet prisoners of war died because of horrific conditions in death marches from the frontline and in forced labour camps.

“Hitler launched a war of annihilation,” said Marie Moutier-Bitan, a historian specialising in the Holocaust and author of Les Champs de la Shoah. “Chief of the German Armed Forces High Command Wilhelm Keitel signed a decree on May 13, 1941 granting preventive amnesty for any crimes allegedly committed by German soldiers against civilians in Soviet territory. This decree also gave army officers the freedom to launch campaigns of reprisal and repression against civilians in response to the slightest suspicion, without any prior investigation.”

Operation Barbarossa marked a new stage in the Holocaust, as Jews were the prime target for German soldiers’ mass killings. “Pogroms and the Holocaust by bullets gathered pace during the invasion,” Moutier-Bitan recounted. “The SS Einsatzgruppen were tasked with eliminating the Nazis’ political opponents and Jews suspected of supporting the Soviet regime – but soon they started shooting large sections of the Jewish population.” More than 500,000 Jews were murdered between June 22 and the end of 1941 on territory captured in Operation Barbarossa.

Barbarossa was just the very beginning of the end for Hitler. While Barbarossa was the act of hubris leading to the nemesis that brought down Nazism, the tide only turned decisively against Hitler when the USSR triumphed at Stalingrad amid unspeakable conditions and the British smashed Erwin Rommel’s forces at El Alamein in November 1942. Even after those Allied victories, it was two more than two and a half years of death and suffering before the Soviet soldiers raised the red flag over the Reichstag, surrounded by the smoke and ruins of an exhausted, defeated Berlin.