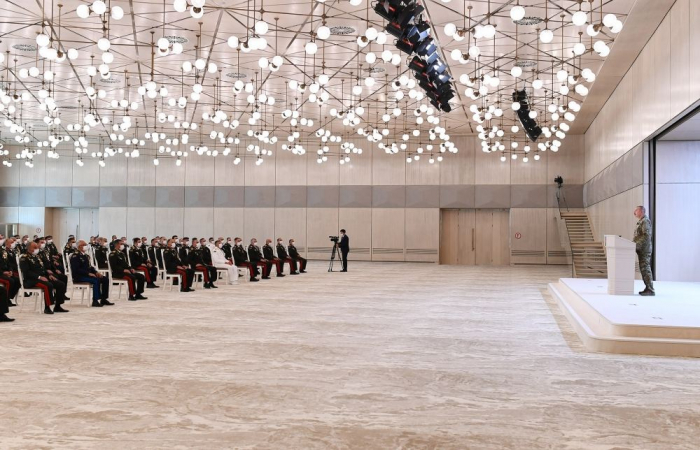 The Karabakh issue was the first issue on my agenda every day as President, President of the Republic of Azerbaijan, Commander-in-Chief of the Armed Forces Ilham Aliyev said addressing the meeting with a leadership and a group of military personnel of Azerbaijani Army on the occasion of the Armed Forces Day at Gulustan Palace, AzVision.az reports.

“I can say that the second Karabakh war was inevitable. Everyone knew that. The Azerbaijani public knew that, the international mediators knew that, and so did we. There were only hopes that the Armenian leadership would at least show the self-defense instinct and leave our lands of its own free will. If that had happened, there would have been no need for war. We did not want war. We do not want it today either. I think that various initiatives should be put forward in our region, in the South Caucasus to reduce the risk of war to zero. We are ready for that. We do not need war. We have achieved what we wanted, and a new era has already begun for us – an era of construction, an era of restoration of our lands,” Azerbaijani president said.

“But this should be a lesson for Armenia. Because they must finally understand that this hostility towards us cost them dearly. What did they achieve? Nothing! They have failed to build an independent state in 30 years. Armenia today cannot be considered an independent state. How can it be independent if it entirely depends on external circles. It is completely dependent on foreign military aid. It depends entirely on political orders from abroad. They had 30 years, why couldn't they build an independent country? Because of the occupation of our lands. This occupation has brought them to this plight. This hostility, the hatred of the Azerbaijani people brought them to this state, and justice triumphed. Sometimes we think in different situations that there is no justice. We wonder why there is no justice. One just has to be patient. One needs to wait for the right time and work every day towards one’s goal. Every day we brought this day closer. The Karabakh issue was the first, issue on my agenda every day as President. Every single day. Every day, I thought what else should be done to achieve this victory and to liberate our lands. We demonstrated it,” the head of state said.