Is Germany, together with NATO openly preparing for a war against Russia? - INTERVIEW 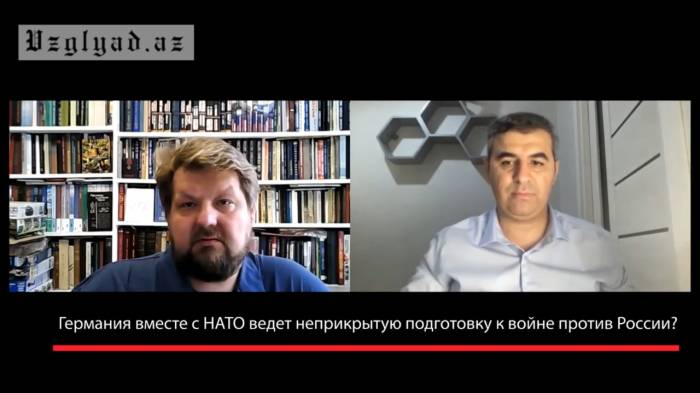 Russia is in favor of restoring a comprehensive partnership with Europe, according to Russian President Vladimir Putin's article "Being Open, Despite the Past" published in the German weekly newspaper Die Zeit. “Our common and indisputable goal is to ensure security on the continent without dividing lines, a common space for equitable cooperation and inclusive development for the prosperity of Europe and the world as a whole,” Putin writes. In the article, he stressed that Moscow is ready "for honest and constructive interaction" with Brussels.

It is interesting if the European Union is ready for the same, there is no exact answer to this question. Thus, the German MP Sevim Dagdalen believes that Germany, together with NATO, is openly preparing for a war against Russia. Russian military expert Aleksey Khlopotov analyzed what is behind this opinion and what the future holds for Russian-German relations in his interview to Vzglyad.az.

Khlopotov said that Germany's declaration of war on Russia is definitely a war between Russia and NATO.The expert believes that it is definitely US intervention, which will ultimately result in a nuclear conflict.

“No one really needs war, neither Russia, nor the United States and even Europe. Europe could generally the tenth issue here. It dances to the tune of the USA. Even in some EU countries that would like to set up good relations with Russia, the United States arrange some conflicts, some provocations through its agents, as for example recently in the Czech Republic.

Europe is also Russia's biggest economic partner. The United States fights for its economic interests, for the supply of energy commodities to Europe. However, Russian gas costs Europe much cheaper than from the oceans or delivered from somewhere from Norway by tankers, ” Russian expert noted.

Speaking about obstacle to the development of interaction between the EU and the Eurasian Economic Union, the expert stated that the policy of Russia aiming to return or annex Crimea.