Former Azerbaijani PoW: "Armenians put my eye out, which could aim the point" - UPDATED 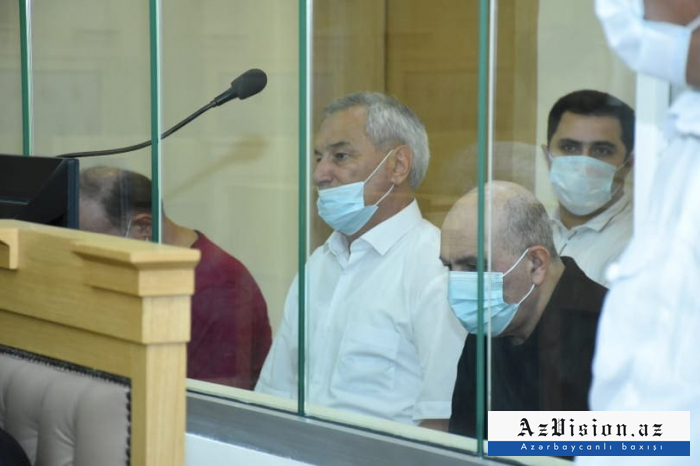 The trial over Armenian militants Ludwig Mkrtychyan and Alyosha Khosrovyan who tortured Azerbaijani captives and committed other heavy criminals during the first Armenia-Azerbaijan Nagorno-Karabakh war (in the 1990s) continued at the Yasamal District Court in Baku on July 14.

The trial was chaired by the judge of the Baku military court Elbey Allahverdiyev. At the meeting, the files were considered. Then the victims gave testimony. The judge informed the sides about the completion of the judicial investigation. The victim, Babayev Kamil, confirmed his testimony to the preliminary investigation. The prosecutor then asked the victim questions. He asked how he knew the accused Armenians. Kamil Babayev said he recognized Mkrtychyan and Khosrovyan from the photos.

The victim said that Alyosha Khosrovyan and Ludwig Mkrtychyan brutally tortured him: " Khosrovyan used to have hair, now he has lost his hair. But his nose is still crooked. He interrogated us in Azerbaijani, but when he beat us, he cursed in Armenian."

The other victim, Rauf Gafarov, said that both accused Armenians brutally tortured him in Shusha prison. Answering the victim's questions, the accused Ludwig Mkrtychyan said that he was in Hadrut and Sugovushan in July-August 1993 and took part in the war for a month. But the victim stressed that Mkrtychyan had been in Shusha prison since 1992. Another victim, Famil Aliyev, said he did not recognize them by name during the preliminary investigation: "I was asked by their names, and I said that I do not know these people.

Then they showed photos, I recognized Lyokha and Losha. I was told that those people are Alyosha Khosrovyan and Ludwig Mkrtychyan, but I knew them as "Lyokha" and "Losha".

Victim Habib Kazimov said that accused Armenians had tortured him during his captivity. “I knew these people from their cruel appearances after so many years.”Victim Javid Huseynov stated that although 28 years have passed, he has not forgotten all those tortures: “Every day I remember all those scenes. When they showed us the photo, they said that it was Ludwig Mkrtichyan. I said that he was "Lyokha". I recognized him from the black spot under his eyes. He was sometimes called "Ludwik". We provided information about them to the investigation years ago. When Khosrovyan was brought into the room, I asked him if he knew me, and he bowed his head. Once I told them that the time would come and they would answer before us. "

Javid Huseyn said that Ludwig Mkrtchyan and Alyosha put his eye out with Khosrovyan’s participation in Shusha prison: “In 1995, at the opening ceremony of statue of "national hero" of the Armenians named Yohan, they hit me on the head with an iron pipe. Then they put me into iron bars and beat me. Ilham Gurbanov, who was a prisoner with us at that time, told them that I drove a tank in the war. Therefore, they took me to Shusha prison and put my right eye out. They said that the the right eye aims the point , so remove the right eye. Ilham Gurbanov, who betrayed us, is currently in prison and sentenced to life imprisonment."

The judge gave suggestions to the sides for completion of the trial. The prosecutor said that he would react to this issue in the next process. The process will further continue on June 28.

The trial of Armenian militants Ludwig Mkrtychyan and Alyosha Khosrovyan, who tortured Azerbaijani captives and committed other heavy criminals during the First Karabakh War, continued at the Yasamal District Court in Baku on July 14.

At the trial, chaired by the judge of the Baku military court Elbey Allahverdiyev, the prosecutor asked for punishment of the accused persons.

In addition, he also acted as an interpreter during the interrogation by the Armenian special services of a civilian resident of Azerbaijan who was taken hostage on September 13, 1999 in the Tapgaragoyunlu village of the Goranboy district, brought to Yerevan and was illegally kept in one of the military units.

The investigation also established that Mkrtchyan at various times beat and tortured 11 captured Azerbaijani citizens in the territory of the Khojavand and Agderе districts, in the Shusha prison and in Yerevan, and also shot a serviceman of one of the military units.

Mkrtychyan was detained on October 20, 2020 in the territory of the Malikjanli village of the Fuzuli district by the servicemen of the Armed Forces of Azerbaijan.

Investigative measures carried out also exposed the criminal acts by Alyosha Khosrovyan, a citizen of Armenia, born in 1967, who together with Mkrtichyan tortured Azerbaijanis.

It was revealed that Khosrovyan tortured five Azerbaijanis during their captivity and subjected them to cruel and inhumane treatment.

Thus, a former soldier of the military unit N of the Ministry of Defense of Azerbaijan taken prisoner in April 1994, was exposed to cruel and inhumane treatment by Khosrovyan. During his illegal detention in one of the houses in Mysmina (Aghbulag) village, Khojavand district he was forced to do heavy construction work of a house for the so-called Minister of Defense of ‘Nagorno-Karabakh’ Samvel Babayan.

Khosrovyan also demonstrated especial cruelty to soldiers of the Azerbaijani Armed Forces, who were taken captives in 1993-1994 and illegally detained in the Shusha city prison. He tortured them by exposing them to regular beatings, starving, and inflicting mental anguish and physical pain.

Khosrovyan was detained by servicemen of the Azerbaijani Armed Forces on October 3, 2020, while conducting reconnaissance operations in the territories of Azerbaijan.

Charges were brought against Mkrtychyan and Khosrovyan on Articles 113 (torture), 115.2 (violation of war laws and customs), 279.1 (creation of armed formations or groups not provided by law), 318.2 (illegal crossing of the state border of Azerbaijan) and other articles of the Criminal Code. By court decisions, arrest as a measure of restraint was chosen against them.

On May 20, 2021, the indictment on the criminal case was approved and sent to Baku Military Court for consideration.