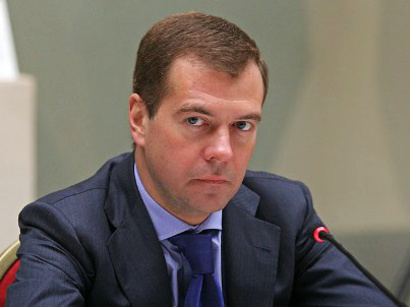 Russian Prime Minister Dmitry Medvedev thinks that Baku and Moscow must work out the agreed positions on economic issues, including the energy sector.
"Taking into account special historical relations between our countries, it is necessary to agree a number of economic issues," Medvedev said at a meeting with participants of XV General Assembly of the Organization of Asian-Pacific News Agencies (OANA) in Moscow today.

"We are partners and we are developing our cooperation in all spheres," he added. "This situation was observed in the past. It continues now and will be so. This is obvious in virtually all aspects of our cooperation."

"Russia and Azerbaijan have the priorities for cooperation, including energy," he stressed.

"Azerbaijan is a huge energy player and I think it is very important to work out the agreed positions on a range of issues," he said.

"The sides will be competitors in some moments," he added. "Proceeding from the international practice, this is normal."

"But I think we will be able to agree," he stressed. "In any case, as the Russian government, we will do everything we can. I hope that our Azerbaijani partners - Azerbaijan`s leadership will do the same."

Azerbaijan was represented by Trend and Azertag news agencies at the meeting with Russian Prime Minister Dmitry Medvedev.

A meeting of XV General Assembly of the Organization of Asian-Pacific News Agencies (OANA) is being held in Moscow on September 18-20.

OANA, established in 1961, is the largest media organization. It brings together the heads of 44 news agencies from 35 world countries.