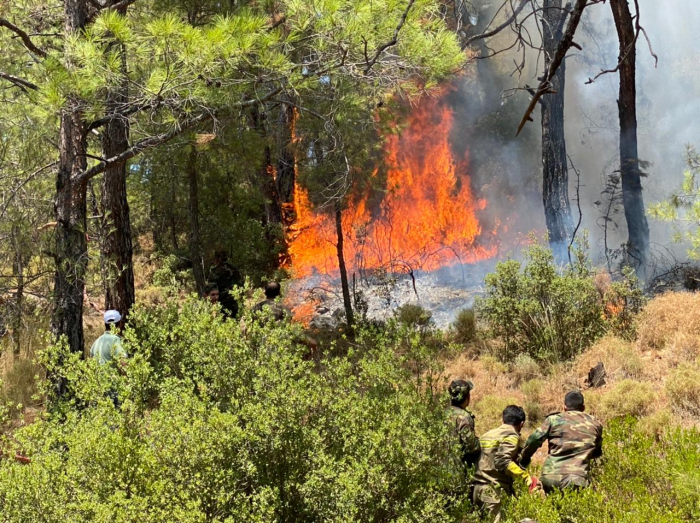 The number of people who lost their lives due to massive forest fires in southern Turkey has increased to seven, the health minister announced on Sunday, AzVision.az reports citing Anadolu Agency.

Fahrettin Koca said on Twitter that the total number of deaths in Antalya's Manavgat district reached seven with the addition of two more fatalities.

He said 497 of the 507 people affected by the fire in Manavgat have been discharged from hospitals.

Similarly, he added, 186 of the 203 people struck by wildfires in Mugla's Marmaris and Bodrum districts have also completed their treatment.

Turkish authorities maintain their tireless efforts to put out the forest fires through both aerial and ground operations. Firefighters – including a group of 100 Azerbaijani firefighters – along with locals, are at work.

A total of 13 aircraft, nine drones, 45 helicopters, one unmanned helicopter, 708 water tankers and water sprinklers, 120 construction machines have been used in the efforts, said Agriculture and Forestry Minister Bekir Pakdemirli, adding that some 4,800 personnel are active in the region.

Sharing the latest figures on his Twitter account, he said a total of 112 fires have erupted since Wednesday, and 111 of them have been contained.

In Mersin, fire brigades managed to contain the fire, which first started in the Silifke district on Thursday. It spread toward Gulnar district on Saturday due to strong winds.

Meanwhile, aerial extinguishing operations started once again in the Marmaris and Koycegiz districts of Mugla province in the southwest. The fire first set ablaze forests in Sirinyer on Wednesday, and then spread to many other locations.

Fire in the resort district of Bodrum in Mugla was also contained, according to Pakdemirli, who said units are now cooling down the fire zones.

The blaze ongoing in the Gazipasa district of southern Antalya province for two days straight was also contained, and the area is being cooled down, the minister said.

Efforts to control the fire in Manavgat, meanwhile, still continue.