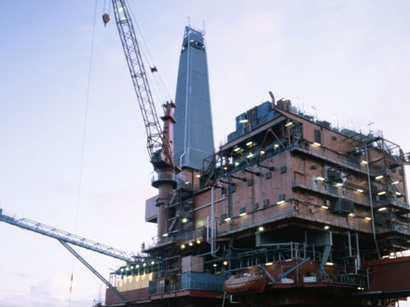 Construction of the drilling rig by SOCAR is planned to be completed in 2016.

According to Giudicelli, Total is also interested in construction of the second new generation drilling rig.

"We would like it to be the second rig, for sure," Giudicelli said.

He also mentioned that the production at Absheron field will start in 2020. The target production volumes at initial stage are between 3-5 billion cubic metres per year.

According to Giudicelli, further plans on Absheron firld development and the forecasts on the possible increase in production will depend on the results appraisal.

Following the drilling of an exploration well, discovery of the major natural gas field Absheron in the Azerbaijani sector of the Caspian was announced in September 2011.

The field`s potential reserves amount to 350 billion cubic meters of gas and 45 million tons of condensate.

The contract on the field was signed between SOCAR and Total on February 27, 2009. Later Total sold 20 per cent equity participation to Gaz De France Suez.