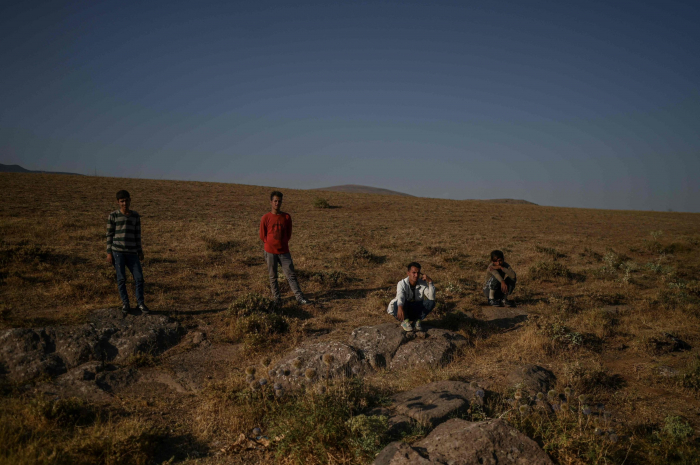 Following the Taliban's takeover of the rule in war-torn Afghanistan, European countries, as well as Turkey, have tightened measures against a new influx of irregular migrants.

Traffic on this key migration route from central Asia to Europe has remained relatively stable compared to previous years. But the fear about the sudden return of Taliban rule in Afghanistan could change that.

Haunted by a 2015 migration crisis fueled by the Syrian war, European leaders desperately want to avoid another large-scale influx of refugees and migrants from Afghanistan. Except for those who helped Western forces in the country's two-decade war, the message to Afghans considering fleeing to Europe is: If you must leave, go to neighboring countries, but don’t come here.

“It must be our goal to keep the majority of the people in the region,” Austrian Interior Minister Karl Nehammer said this week, echoing what many European leaders say.

European Union officials told a meeting of interior ministers this week that the most important lesson from 2015 was not to leave Afghans to their own devices and that without urgent humanitarian help they will start moving, according to a confidential German diplomatic memo obtained by The Associated Press (AP).

Austria, among the EU’s migration hard-liners, suggested setting up “deportation centers” in countries neighboring Afghanistan so that EU countries can deport Afghans who have been denied asylum even if they cannot be sent back to their homeland.

The desperate scenes of people clinging to aircraft taking off from Kabul Hamid Karzai International Airport have only deepened Europe’s anxiety over a potential refugee crisis. The U.S. and its NATO allies are scrambling to evacuate thousands of Afghans who fear they’ll be punished by the Taliban for having worked with Western forces. But other Afghans are unlikely to get the same welcome.

Even Germany, which since 2015 has admitted more Syrians than any other Western nation, is sending a different signal today.

Several German politicians, including Armin Laschet, the center-right Union bloc’s candidate to succeed Angela Merkel as chancellor, warned last week that there must be “no-repeat” of the migration crisis of 2015.

French President Emmanuel Macron stressed that “Europe alone cannot shoulder the consequences” of the situation in Afghanistan and that it “must anticipate and protect ourselves against significant irregular migratory flows.”

Britain, which left the EU in 2020, said it would welcome 5,000 Afghan refugees this year and resettle 20,000 Afghans in coming years.

Besides that, there have been few concrete offers from European countries, which besides evacuating their own citizens and Afghan collaborators, say they’re focusing on helping Afghans inside their country and in neighboring countries such as Iran and Pakistan.

“Partnerships with third-party countries will be at the heart of our discussion in the European Union. We have to adopt strategies that ensure migration is possible in an orderly and consistent fashion," he said. "We need to find that balance between the dignity of the European Union and the capacity to defend European Union interests.”

Greece, whose scenic islands facing the Turkish coast were the European point of entry for hundreds of thousands of Syrians, Iraqis, Afghans and others six years ago, has made clear it doesn’t want to relive that crisis.

Migration Minister Notis Mitarachi said Greece won’t accept being the “gateway for irregular flows into the EU,” and that it considers Turkey to be a safe place for Afghans.

In response, President Recep Tayyip Erdoğan warned last week that “Turkey has no duty, responsibility or obligation to be Europe’s refugee warehouse.”

The Turkish president talked about migration from Afghanistan in a rare phone call with Greek Prime Minister Kyriakos Mitsotakis on Friday, and also is discussing the issue with Iran.

Turkey has been a key transit point for asylum-seekers attempting to cross into Europe to start new lives, especially those fleeing war and persecution.

Ankara has made it clear that it will not bear the burden of migration crises experienced as a result of the decisions of third countries.

Turkey hosts more refugees than any country in the world. After the Syrian civil war broke out in 2011, Turkey adopted an “open-door policy” for people fleeing the conflict, granting them “temporary protection” status.

Afghans are believed to be the second-largest refugee community in Turkey after Syrians. Many of the migrants arriving via Iran are heading for Istanbul to find work or passage to another coastal city from which to embark for Europe.

Attitudes toward migrants have hardened in Europe following the 2015 crisis, fueling the rise of far-right parties like the Alternative for Germany, the biggest opposition party in parliament ahead of Germany's parliamentary election next month.

Even in Turkey, acknowledging the public’s growing “unease” about illegal migration, Erdoğan noted how his government has reinforced the eastern border with Iran with military, gendarmerie, police and the new wall, which has been under construction since 2017.

AP journalists near the Turkish border with Iran encountered dozens of Afghans this week, mostly young men, but also some women and children. Smuggled across the border at night in small groups, they said they left their country to escape the Taliban, violence and poverty.

“The situation in Afghanistan was intense,” said one young man, Hassan Khan. “The Taliban captured the whole of Afghanistan. But there is no work in Afghanistan, we were compelled to come here.”

Observers say there are no indications yet of any mass movement across the border. Turkish authorities say they have intercepted 35,000 Afghans entering the country illegally so far this year, compared with over 50,000 in all of 2020 and more than 200,000 in 2019.

The United Nations High Commissioner for Refugees (UNCHR) estimates that 90% of the 2.6 million Afghan refugees outside of the country live in neighboring Iran and Pakistan. Both countries also host large numbers of Afghans who left in search of better economic opportunities.

By comparison, about 630,000 Afghans have applied for asylum in EU countries in the past 10 years, with the highest numbers in Germany, Hungary, Greece and Sweden, according to the EU statistics agency.

Jan Egeland, secretary-general of the Norwegian Refugee Council, said it’s not a foregone conclusion that the Taliban takeover will result in a new refugee crisis.

“I would warn against a self-fulfilling prophecy,” he told AP. Afghans are “scared, bewildered but also hopeful that a long, long war will be over and maybe now they can avoid the crossfire.”

He said much depends on the Taliban allowing development and humanitarian work to continue.

“If you would have a collapse of public services and if there would be a major food crisis, there will be, for sure, a mass movement of people,” Egeland said.